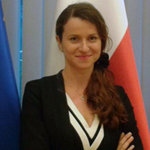 Diplomat, Security Policy Department, Office for Preparing the NATO Summit in Poland in 2016

Ministry of Foreign Affairs of the Republic of Poland

Before joining the MFA, I was a Marie Curie Researcher on EU External Action in a think tank Trans European Policy Studies Association (TEPSA) in Brussels. Prior to that I had the pleasure to be a trainee innter alia in the Cabinet of Š. FÜLE, Commissioner for ENP and Enlargement in the European Commission (2012), Department of Foreign Policy Strategy in the Polish MFA (2012), European Parliament (2011) and Polish Embassy in Moscow (2010).
In the meantime I was a participant in numerous international projects and conferences.
I am a founding member and ex-president of the Centre for International Initiatives, a Polish think tank. For my civil engagement I was granted an honourable membership of the International Relations Students’ Association of the Jagiellonian University, from where I graduated in international relations.

The year at the College was a defining moment of my life. Not only did I recieve the most sophisticated education I could have imagined, but I also found inspiration to pursue a career I had always dreamed of, to work in the area of diplomacy and the European Union. Last but not least, the College has brought into my life true and unforgettable friendships and a 'neverending' network of "the College people" reaching beyond the so called "Brussels bubble"...