On Monday 17 February 2020, students and citizens of Bruges attended an evening lecture as part of the in October 2019 newly launched Library Talks Series. The idea being to put our new Promotion Patron Hannah Arendt in the spotlight. The second lecture titled: "The political theory of Hannah Arendt. Why her thinking is still relevant for today's politics", focused on different insights of Arendt's political thought as totalitarianism, democracy and the importance of public debate, terrorism, human rights, the nation and national sovereignty.

Our guest speaker for this educational and insightful evening was Professor Dirk DE SCHUTTER, who studied literature and philosophy at the KU Leuven and Georgetown University in Washington D.C and was a full professor until 1 October 2015 at KU Leuven (Campus Brussels) and University of Antwerp. He translated several works by Hannah Arendt into Dutch and publishes articles on 19th and 20th century philosophy and literature.  Our audience, consisting of around 40 students and local citizens, had the opportunity to raise their critical questions.

Mr Stam KAMIL SAEED, Director of the Center for Pedagogical Training and Development at the University of Sulaimani in the Kurdistan Region of Iraq, attended the lecture and shared his thoughts and appreciation with us: "The event was quite inspiring and meaningful. Professor Dirk DE SCHUTTER gave us a very interesting lecture on Hannah Arendt’s importance for (in) today's politics. We live in a world where refugee crisis, wars, mass protests, polarisation, and rising populists are the main characteristics of global politics. And this is why Arendt is quite relevant. I have travelled a few thousand kilometres from Kurdistan Region of Iraq to participate in this event and share some reflections on why Ardent is important for Kurdish politics, culture and for broader Middle East. And, I am thankful for the opportunity."

One of the goals of the Library Talks Series, besides the focus on the ideas and life of Hannah Arendt, is to lead people from outside the College of Europe to the impressive collection of books and electronic resources on European integration available in our Library and European Documentation Centre. 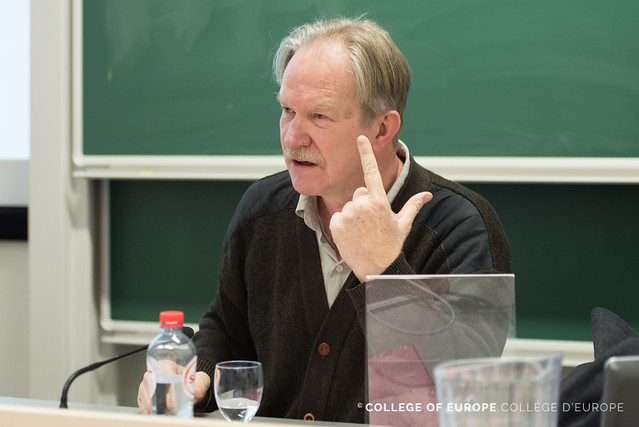