Monday As the first event of the DACH national Week, the Swiss Students of the German-Austrian-Swiss Society organized a “Soirée Suisse”. The evening started by an introduction on the specificity of the Swiss political system, with insights provided by Minister Mr. Gilles RODUIT, Deputy Head of the Mission of Switzerland to the EU. The students Idris ABDELKHALEK, Laura ZILIO and Thomas BÉTEND then presented the movie Die göttliche Ordnung (L’ordre divin), which tells the story of Swiss women’s fight for the vote in Appenzell in the 1970s. Finally, the students enjoyed some typical Swiss wine and food (Bündtnerfleisch, cheese and of course chocolate) in the Dijver foyer. The DACH Society would like to thank the Mission of Switzerland to the EU and Presence Switzerland, Federal Department of Foreign Affairs, for supporting in the event.

Tuesday The second event of the DACH National Week was a Kaffeeklatsch in the Phoenix Café in order to provide our friends with some sweets and Viennese Verlängerter in Dijver and Verversdijk. Tasty success, especially for Petra’s Sachertorte!

Thursday It all started with the traditional national week lunch. We prepared a Flädlesuppe – a bouillon with strips of pancake, which is particularly popular in southern Germany and is also known as Frittatensuppe in Austria –, followed by Bavarian Schweinebraten (pork roast) with Serviettenknödel (dumplings) and red cabbage, or – for our vegetarians – Rahmschwammerl (a creamy mushroom sauce). Everyone enjoyed the sweet note of the end, a delicious Kaiserschmarren. Mahlzeit!

In the afternoon, the DACH Society had the honour of receiving Dr Martin SELMAYR, former Secretary General of the European Commission (2018-2019) as well as Chief of staff of Jean-Claude JUNCKER (2014-2018) and current Head of the Commission Representation in Austria. The students attended his lecture on "The European Commission as a very Political Institution: An Assessment from within the Machine Room of the Juncker Commission", which was followed by a discussion between Dr SELMAYR and Thomas GUTSCHKER, the political correspondent for EU Affairs of the Frankfurter Allgemeine Zeitung. After a short Q&A, participants were invited to a reception in the Verversdijk Foyer.

The DACH Society would like to thank the Konrad Adenauer Stiftung for its support in the organisation of this event.

The day finished with a Berlin Techno Night at Parendtal Advisory (student bar). Our fellow students enjoyed Julius’s set through the night, which was a great success for the democratisation of techno music.

Saturday The highlight of the week was certainly the Viennese Ball. With the generous support of the City of Vienna, we were able to transform the venue Het Entrepot into a beautiful ballroom. After the traditional opening dance by some of the DACH students, we danced to waltz played by Gustav KWINTET, a local string quintet. After a short performance of the College band (The Nightwatchers) and the traditional Mitternachts quadrille, everyone enjoyed Thomas’ set until 3.30 am when it was time to leave. The female guests of the ball went home with a so-called Damenspende – a small present of the City of Vienna. Judging by the smiles on everyone’s faces and the comments we received, the night was a big hit and a good ending for our National Week!

The DACH Society would like to thank the City of Vienna, the Deutsch-Französische Hochschule and the Raiffeisenbank for its support.

We would also like to thank Metty and Johannes for the dancing lessons, Nils and Christopher for taking pictures, and especially the BarCo for handling the bar. 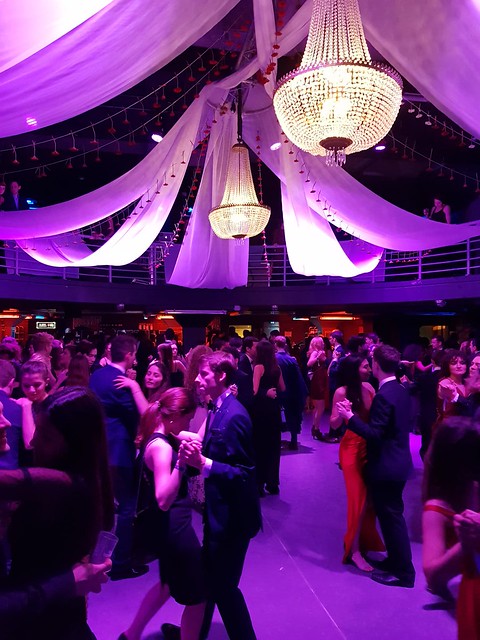