During a stressful (upcoming thesis deadline) but joyful week of April, the College of Europe donned the mantle of the #PurpleRainbow. The Student Association for Gender Equality (SAGE) and the LGBTQI+ group Queeropeans organised the first edition of the EUROPEAN GENDER WEEK in the history of the College of Europe! Gender is a worldwide issue. It transcends cultures and social classes. It raises many questions from gender pay gap to gender disparity in leadership. It touches upon almost all topics of society, whether it is about the recognition of the role of women in European history or about LGBTQI+ issues in diplomacy. For a week, we reflected on Gender through various ways. Our goal was to engage with students with fun yet challenging events and themes.

On Tuesday, we kicked off at the Canteen with the reveal of the LGBTQI+, Transgender, Bisexual and Intersex flags, while reviewing the history of their creation. Later on, we opened the exhibition "Founding Mothers of Europe" with a vernissage: Everybody knows the 11 Founding Fathers of Europe, but where are the women? For the European Gender Week, we have highlighted the contribution of women in building a peaceful and united Europe through the portraits of 10 great European women who had a significant impact on the success of the European Union: the Founding Mothers of Europe!

In the same spirit, we have demonstrated the important gender gap and the lack of female representation in the role models honored by the College of Europe. For one week, the male promotion patrons were replaced by their historical female equivalent and the portraits of the male speakers of the opening ceremony were covered in black to physically show the lack of women speakers.

On Wednesday, students could enjoy a well-deserved break and freshly-baked cakes, patisseries and other delicacies with a colorful look!

On Friday, students joined us for an evening of drinks and discussions on the topic "Being Queer" at our traditional Gender Drink. We also had a special guest to tell us more about diplomacy and LGBTQI+ issues.

The European Gender Week was also digital! With the Definition of Day, students’ knowledge was put to the test on terms like "patriarchy", "mental load" or "toxic masculinity". Also, in cooperation with the Humans of the Canteen, 4 great portraits (3 students and 1 AA) were published. They talked about their personal relation with gender, Intersectionality, religion, queerness and homophobia. In collaboration with the podcast group, we published a special Burst the Bubble episode with interviews from alumna Jeanne PONTE and Commissioner on Gender Equality Vera JOUROVA.

Finally, we received the support of the College administration! The LGBTQI+ flag was on display at the entrance of the Dijver building and the library offered a special book selection. Following our open letter signed by 179 students and alumnae/i, we were received by the Rector who took into account our demands for a workshop on consent, more diverse voices on the curriculum and others.

Thank you all for joining us under the #PurpleRainbow.

With love, SAGE and Queeropeans of the Marin Promotion 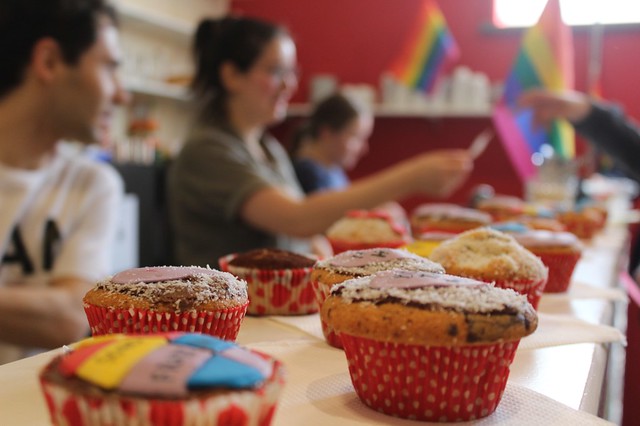