To open the French national week on Monday, the French Society had the great pleasure to welcome MP Mr Pieyre-Alexandre ANGLADE, head of the national task force for the 2019 European elections set up by the French President Emmanuel MACRON. This conference dealt with the strategy of the president for the European Union revival. The evening continued with a post-conference buffet, where champagne, French wine, cheese and other treats were on the menu, generously offered by the sponsors: Moet & Chandon, the Bruggeman distillery and Fidal.

On Tuesday, students of the College were treated as special guests of the newly opened restaurant "la Guinguette de Simone". French cuisine was celebrated during this meal with a festive menu: "Œufs mimosa" and "toast fromage de chèvre et miel" as starter; "filet de poulet, sauce crémée avec pleurotte, cèpes et vin blanc" and "gratin dauphinois" or "quiche poireau et oignons" as main dish and finally "café gourmand" with coffee, and "merveilleux" from Aux Merveilleux de Fred Bruges for dessert. Words were uttered this day, such as “I’m going to take a picture of this to remember the moment”. This culinary ballet took place with the sweet sound of an accordeon to render a genuine atmosphere.

The following days, balls were thrown at the Oliebaan Residence in an authentic "pétanque" tournament, fueled with true French "Pastis" under the « true » Belgium sun : almost like the south of France!

On Saturday, night fewer kicked in at the expense of the French monarchy dressed adequately for this occasion. A pilori was set-up in Oude Zak where many heads were lost this night, either on the pilori or on the dance floor. Champagne, Saint-Raphael from the Bruggeman distillery  and fine liquors from Le Cambusier were offered to hydrate the guests for the night that ended up on "Les lacs du Connemara" song, a real acme.

Dizzy heads found shelter during the last event, a screening of "La grande Vadrouille" with delicious "madeleine" from Jeanette.

From the French Society: Thank you very much for everything to everyone! 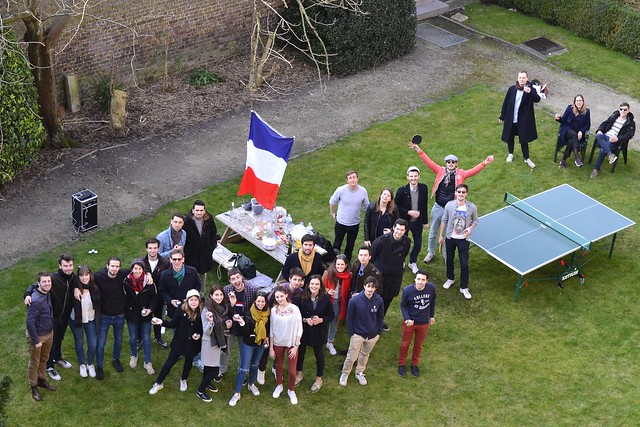