The Manuel Marín Hellenic Society composed of the students Evita GKAIDATZI, Tatiana KAKARA, Christina KATTAMI, Alexia KAZTARIDOU, Vera KERAUDREN, Konstantina MARKOMICHALI, Mirka OIKONOMOPOULOU, Orestis PASTELLAS, Dionysis POUKAMISAS, Vassilis ROVILOS, Juan SCHINAS, Sophocles SCHISAS, Katerina TERLIXIDOU, Chrysa TRAMOUNTANA and Roy TZIVRA, successfully organised the 2019 Hellenic National Week. The Hellenic Society of the College dedicated itself to delivering a high-quality and high-value outcome both for the students of the Marín promotion as well as for the academic staff. Utmost importance was placed on the relevance of the speeches to the academic curriculum of EU studies, the introduction to the cultural heritage of Greece & Cyprus and last but not least, the entertainment of the student body in true Hellenic fashion. This way, the whole campus could #GoGreek4aWeek!

On Monday 11th of March, the Hellenic Society had the honor to kick-start the Hellenic National Week with a very special speaker. Mrs Sofia ASTERIADI, Deputy Head of Cabinet of Mr Dimitris AVRAMOPOULOS, Commissioner for Migration, Home Affairs and Citizenship, addressed the students of the Manuel Marín Promotion. In her insightful speech, she highlighted the challenges this portfolio carries, but also the opportunities that arise from the given circumstances to foster a more sustainable European policy on migration. Specialised in external border management and Schengen, and in charge of non-portfolio responsibilities, including – among others – relations with Turkey, the Western Balkans and enlargement, the Hellenic Society felt she was an ideal speaker to address graduates specializing in EU policies. The Q&A session after her intervention allowed for a lively debate and a fruitful exchange. On Thursday the 14th, the Hellenic Society decided to have a Greek Overload Day – meaning food, debate and dance. Early in the morning, the members of the Hellenic Society gathered to prepare everything for the much anticipated (and rightly so) Greek Feast! Serving grandma-sized portions, the Hellenic Society offered giouvetsi (orzo pasta with veal) or gemista (stuffed tomatoes and peppers), complemented by a wide range of spreads. Nothing could be done without the important contribution of our sponsors: Olive Tree, Alpha Foods, Antlantide, and Strofilia.

On Saturday 16th March, the Hellenic Society bade farewell to its National Week by hosting a conference of vital importance both for the society itself and for the students. We had the honor of hosting Chief Negotiator for the Cyprus Question, Mr Andreas MAVROYIANNIS. He delivered a speech on International Negotiations, Cyprus and the role of the EU, while outlining his experience as Negotiator at the United Nations and the European Union.

The Hellenic Society would like to thank everyone for an amazing and crazy week. From conferences to togas, you outdid our expectations every single time. The entire College went Greek for a week and we loved it. You can see the photo album of the Hellenic Week following the facebook page. You can view the week’s schedule (together with some fun marketing) here. 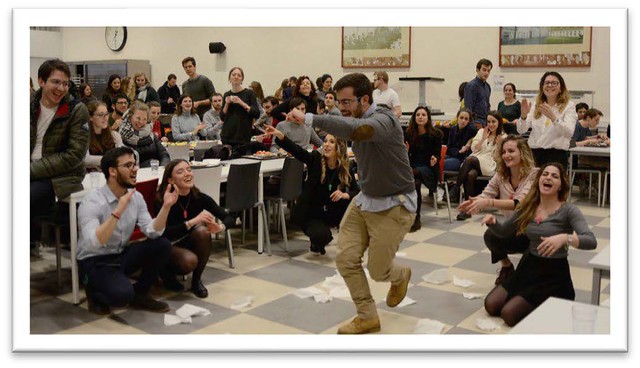