Within the framework of the 2018 Hungarian – Slovak National Week at the College of Europe, the Hungarian and Slovak students organized several programs.

Starting on the 9th of January, the Hungarian students had the chance to welcome their first high level speaker, State Secretary for EU Affairs Mr. Szabolcs TAKÁCS, who gave an insight into the current EU-Hungary relations and shared his thoughts on how countries could tackle cross-border issues, such as climate change and migration. To our great joy, the event raised the attention of many College students, who participated actively in the discussion to get to know more about the Hungarian perspective regarding the EU.

The Slovak program of the Hungarian-Slovak national week started on Wednesday, January 10th with an event in collaboration with The Phoenix Café where we sold Slovak traditional cakes and other sweets. The poppy seed rolls and honey-nut cake were a hit. We were really pleased with the turnout and were glad that we could share this part of our culture with other students. On the same day the Hungarian students had the honor to present their second guest, Hungarian Commissioner Mr. Tibor NAVRACSICS, who holds the portfolio of Education, Youth, Sports and Culture. The event was moderated by Prof. Sieglinde GSTÖHL, Director of EU International Relations and Diplomacy Studies Department and took place within the frames of a Citizens Dialogue, in which students were encouraged to ask questions and start a dialogue with the Commissioner. Based on the questions of the students, the discussion focused on the future of Erasmus+ and a possibility of an increased budget. Commissioner NAVRACSICS also talked about the importance of STEM education and about investing in cultural and creative industries which can tackle social problems and provide a strong base for economic development. The doubling of the Erasmus+ budget was a hot topic, which would provide students an opportunity to get to know Europe with regards to education, culture, society.

As a following event on Thursday, January 11th, the Hungarian and the Slovak Team had a joint cooking session. The event was a big success, in which students tasted the traditional Hungarian specialty, the famous gulyás. The Slovak Team prepared the vegetarian option, which was dumplings with cabbage and the semolina pudding for dessert. We received many compliments on all of the dishes.

The main event of the Slovak part of the week was the Slovak party night at the student bar "La Merveille" later on Thursday, in the evening. We decorated the bar with pictures of famous places, nature and Slovak folk costumes. The night started with a quiz about Slovakia in which students in groups were competing for a prize of traditional Tatratea. After the quiz, a mix of Slovak music from different genres was played. As part of our bar night we were selling traditional alcohol of different flavors. Many students tried several types and we got some positive feedback, so can definitely say that the night was a success.

On Friday, January 12th Slovakia related events continued with a Slovak-Ukrainian movie - The Line. This event was organized in collaboration with the CineClub. In the short discussion after the screening most of the students expressed they found the movie interesting and thought provoking. We found it to be a very nice way to end our national week.

In order to close the National Week, a wine-tasting event took place at Dijver Foyer on the 13th of January organized by the Hungarian students, with some traditional Hungarian food such as apple pie and “pogácsa”. The event would not have been possible without the generous support of the Permanent Representation of Hungary to the EU. Both the wine and the pastries were provided by them and the event was a great opportunity to introduce students to the rich wine-culture of the country. The Hungarian team also provided traditional and modern Hungarian music ranging from folk to pop.

In the name of the Slovak and Hungarian team we hope that the National week succeeded to give deeper insight into the mentality, culture and gastronomy of our countries, leaving a good impression on the students, and providing them with as unforgettable memories as we obtained during the organization and the realization of the National Week. 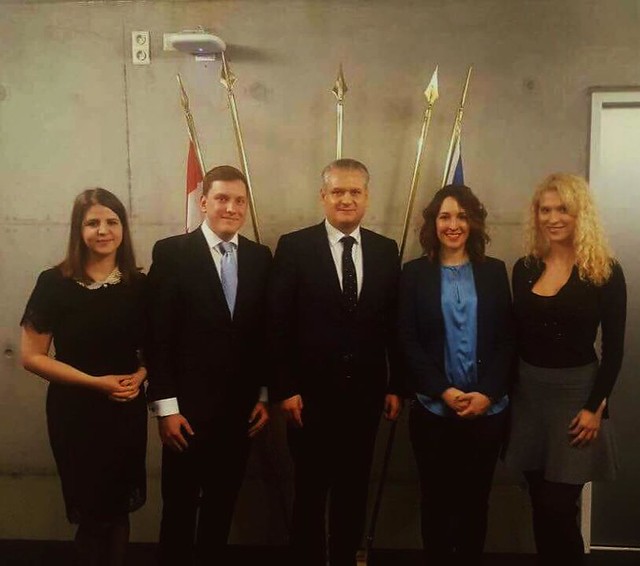