The Italian National Week took place from 17 to 22 February 2020. The theme chosen for this year’s Italian Week was Dante’s Divine Comedy and, more in general, the discovery of Italian culture through Art, Food and the Italian Language. For these reasons, we decided to launch the hashtag #SaràUnInferno, “It will be a Hell” (of a week!)

Monday The Italian National Week started… at breakfast. On Monday, with the courtesy of our historic partner Ferrero, the Italian Society provided 6 kg of Nutella in each residence for the daily breakfast.

Tuesday On Tuesday, the Italian Society hosted its first official event in Room E in Dijver, with the screening of “Nuovo Cinema Paradiso”, an all-time classic by Giuseppe TORNATORE and winner of the Academy Awards for Best Foreign Film in 1990. At the ending of the film, the (very moved!) audience was given some sweet treats sponsored by Ferrero.

Wednesday On Wednesday at 8 pm (and some minutes of delay!) the doors of the Foyer opened for the Aperitivo Dantesco. The Italian Society merged the features of a classical Italian "aperitivo" with the discovery of Dante’s world, his Divine Comedy and the most relevant themes around his works.

At the same time, Museo Casa di Dante provided us with boards and pictures on Dante’s life and work. Sveva FRANCO and Chiara FIORILLO became Dante and Virgil for one night and performed some parts of canticas while explaining to the students some features of Dante’s history.

Some members of the Italian Society welcomed the most curious to their small workshops centered around specific topics: the history of Paolo and Francesca and the theme of Love in Dante’s works, the theme of the Unknown with Ulysses, the Migration perspective and Giustiniano, and the central theme of travel. A lot of students came and asked about the 40.000-line masterpiece and were happy to discover the peculiar richness of such work of art.

Thursday The awaited Italian lunch took place on Thursday. The Italian Society served pasta al ragù and pasta alla norma (with aubergines), home-made focaccia pugliese and home-made onion jam, a typical salad of fennel and oranges, pumpkin soup and Tiramisù. Apulian olive oil was kindly provided by Azienda Agricola Giannelli. The canteen was decorated in green, white and red with Ferrarelle bottles of still and sparkling water. Every student also received a gift bag with 1kg of spaghetti and an apron, kindly offered by Pasta Garofalo. Chiara FIORILLO and Matteo RICEPUTI performed a voice-guitar duet bringing the Partenopean vibes of some old classics.

In the evening, the Inferno Night at the Bar in Goudenhand brought the "Angels and Demons" theme within the wall of a decorated Inferno. Campari provided for with Aperol and Campari Spritz, served by the Italian Society crew.

Friday For the last official event of the Italian National Week, we held a high-level conference with Enrico LETTA, former Prime Minister of the Italian Republic and current Dean of the International Affairs School at SciencesPo Paris. The theme revolved around the current internal challenges the European Union has to face in order to strive for a global leadership and was held in French. David CARRETTA, journalist based in Brussels for il Foglio and Radio Radicale, moderated the conference through questions focused on issues such as the EU Budget and the Conference on the Future of Europe. The interventions were followed by an active Q&A with the students.

The guests and the participants were also welcomed downstairs in the Foyer for a light lunch prepared by the Italian Society and sponsored by Coldiretti. Wine, a selection of hams and salami, taralli, olive oil, gorgonzola, Parmesan and Asiago cheese gave the right goodbye to the Italian National Week. The guests were also gifted with a tie from the worldwide-known sartorial brand Marinella.

The Italian Society warmly thanks all the students and the staff who attended our events. A great thank you to our sponsors Bonelli Erede with Lombardi, Cleary Gottlieb, Portolano Cavallo and the Italian Institute of Culture in Brussels; special thanks to the Italian Embassy in Belgium for the precious support in the realization of the events.

Finally, the President would like to thank the Italian Society for the hard work and dedication during the National Week and during the previous months. Grazie mille a tutti and see you at the final party in June! 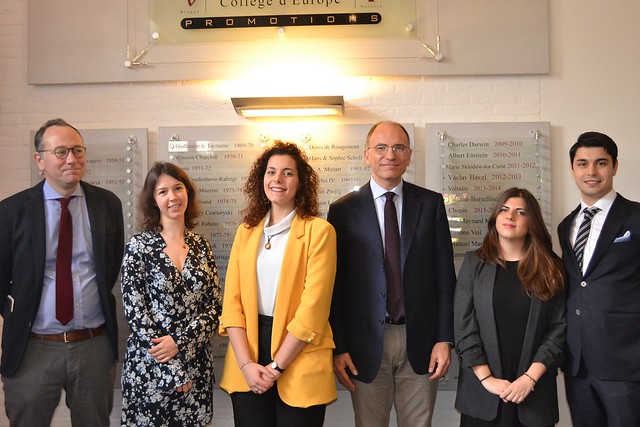