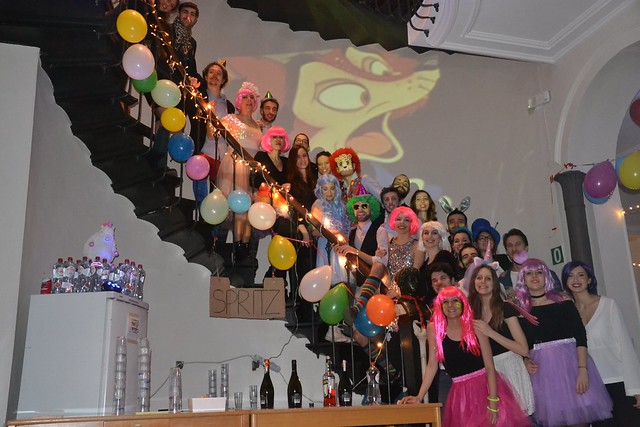 The Italy & San Marino National Week took place from 14-19 January 2019. Guided by our hashtag #nessundorma, we kept the College community on its feet for an unforgettable week!

On Monday morning, students found a sweet surprise waiting for them in the breakfast rooms: 3 kg tubs of Nutella offered by Ferrero. We kicked off the National Week at lunchtime in the canteen with a flash mob of well-known songs in Italian — Volare; Azzurro; Quando, Quando, Quando; Il cielo in una stanza; Con te partirò; Sarà perché ti amo; Nessun dorma — at the end of which the representatives of the Italian and San Marino Societies, Maria Elena SANDALLI and Sara CONTI, jointly hung the national flags on the canteen balcony in a gesture of friendship between Italy and San Marino. After dinner, we inaugurated the National Week with photo exhibitions on "Matera, 2019 European Capital of Culture" and "San Marino, UNESCO World Heritage Site", followed by a tasting of local products and wine.

On Tuesday, our beloved Garenmarkt restaurant was transformed into a ristorante. A delicious Italian lunch was served to an enthusiastic crowd who gave a standing ovation to the students and canteen staff who prepared the lunch and served at the tables.

On Wednesday, the College Phoenix Café hosted an Italian merenda with five regional cakes representing the richness and variety of desserts from both Italy and San Marino — Sbrisolona, Bustrengo, Tiramisù, Zeppole and Caprese — which were sold out in no time!

On Friday, the conference on "Italian Populism: Beyond Left and Right" with guests Mr Paolo GENTILONI, former Prime Minister of Italy, and Mr Marc LAZAR, Professor of Sociology and History at SciencesPo Paris, was an opportunity to further understand the societal and political environment, which brought on the rise to power of populist parties in Italy. The conference was followed by an aperitivo "Sapori di Norcia" generously offered by the city of Norcia and local producers.

Finally, on Saturday night, the Biskajer residence was transformed into the setting of the Pleasure Island, taken from the well-known Italian fairy tale Pinocchio. Students dressed up in colourful costumes, danced to Italian disco hits, and enjoyed our very own Aperol Spritz.