The Arab National Week (North Africa and the Levant) has taken place at the College of Europe, Bruges campus, during the week of 7-11 January 2019.

The students organized several interactive events to promote their cultures. Starting with the "Arab coffeehouse" reception, where each country had a table with a representative serving of sweets, tea, coffee, where students gathered to talk about their country's culture as well as political and social aspects.

In addition, a VIP conference was organized as one of the week's events, where H.E. Dr. Mohammed AMEUR, the Ambassador of Morocco to Belgium and Luxembourg, gave a speech on the resolution of the Western Sahara conflict and Euro-Maghreb perspectives, followed by a generous tea and cake reception.

The first bar night of the second semester was unforgettable thanks to the Arab Party where the ensemble "Watan Dabke" performed a live dabke show followed by a workshop teaching students how to perform the basic dabke steps and dancing all together.

Finally, the Arab week came to an end with the film festival where movies from Egypt and Tunisia, tackling the issue of democracy, were screened and followed by an interactive discussion. Also, movies from Palestine and Syria focusing on the mobilization and borders issue were screened and followed by a discussion with the students surprised of the mobilization struggle faced by people living there.

With these above-mentioned events, the Arab students shared their culture, as well as unforgettable memories and laughs with the college students, who showered the Arab society members with their sweet words and compliments saying that "the Arab society has set the National Week standards high". 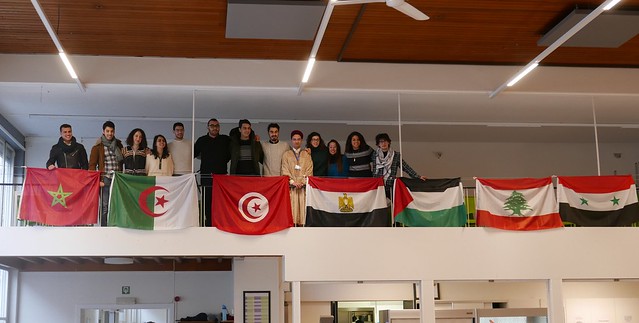