Meet the Student Representatives for the Eliane Vogel-Polsky promotion! 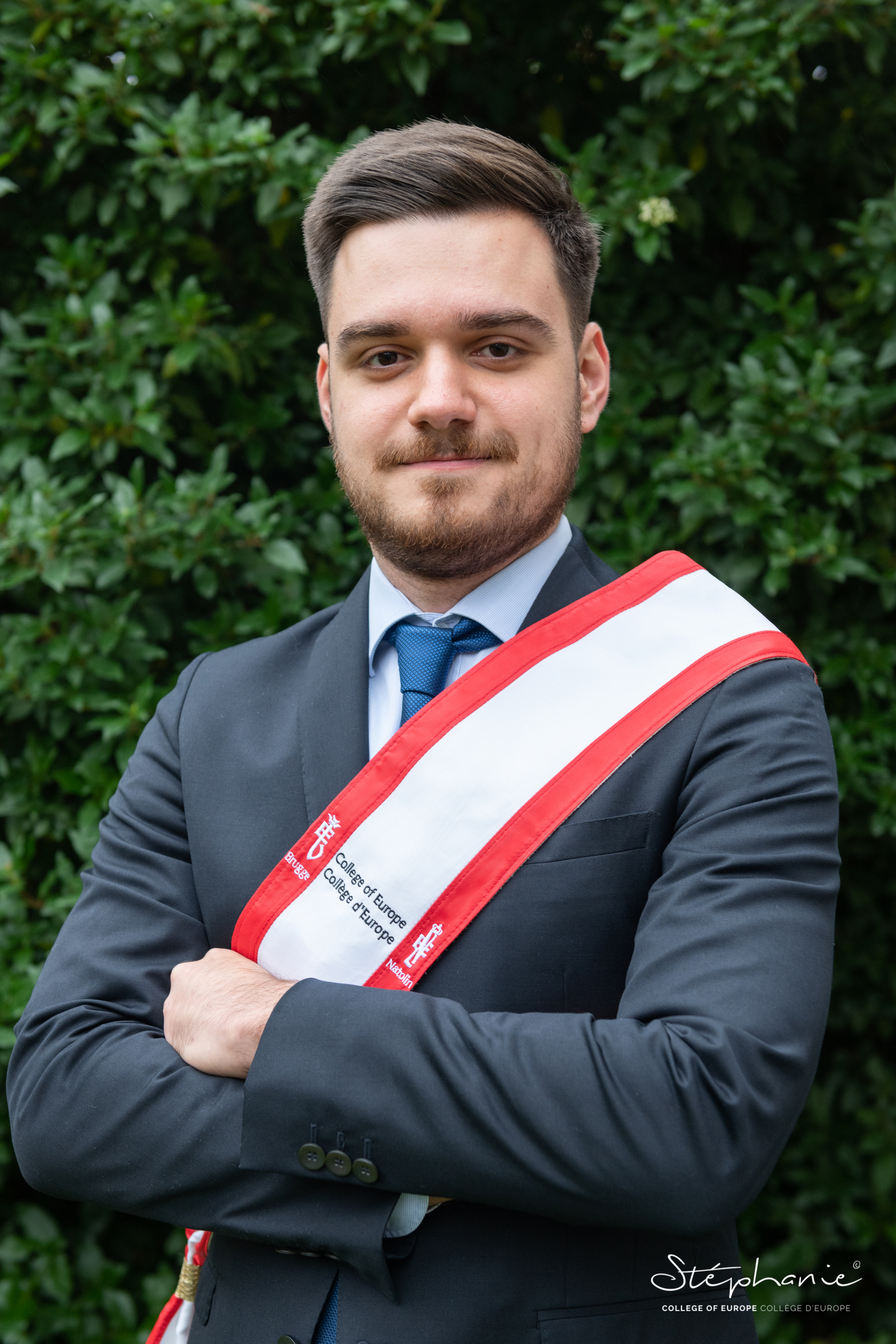 I am Macedonian and I study Economic European Studies, specializing in European Economic Integration and Business. Growing up between Skopje and Brussels put me at the heart of the European and Euroatlantic integration processes, projecting my future self in that field. As part of my studies in Economics and Management at the University of Strasbourg, I made my first steps in the private sector by completing an internship in the chemical industry followed by a two-year apprenticeship in the insurance industry in Paris. After my graduation in 2019 and eager to engage more into the public sector, I embarked into the United Nations system regional office for Southeast Europe as an Associate Economist working in the Energy and Climate Change sector. The College of Europe is the prime opportunity for me to learn more about how the private and the public sector can go hand in hand for the benefit of our societies. 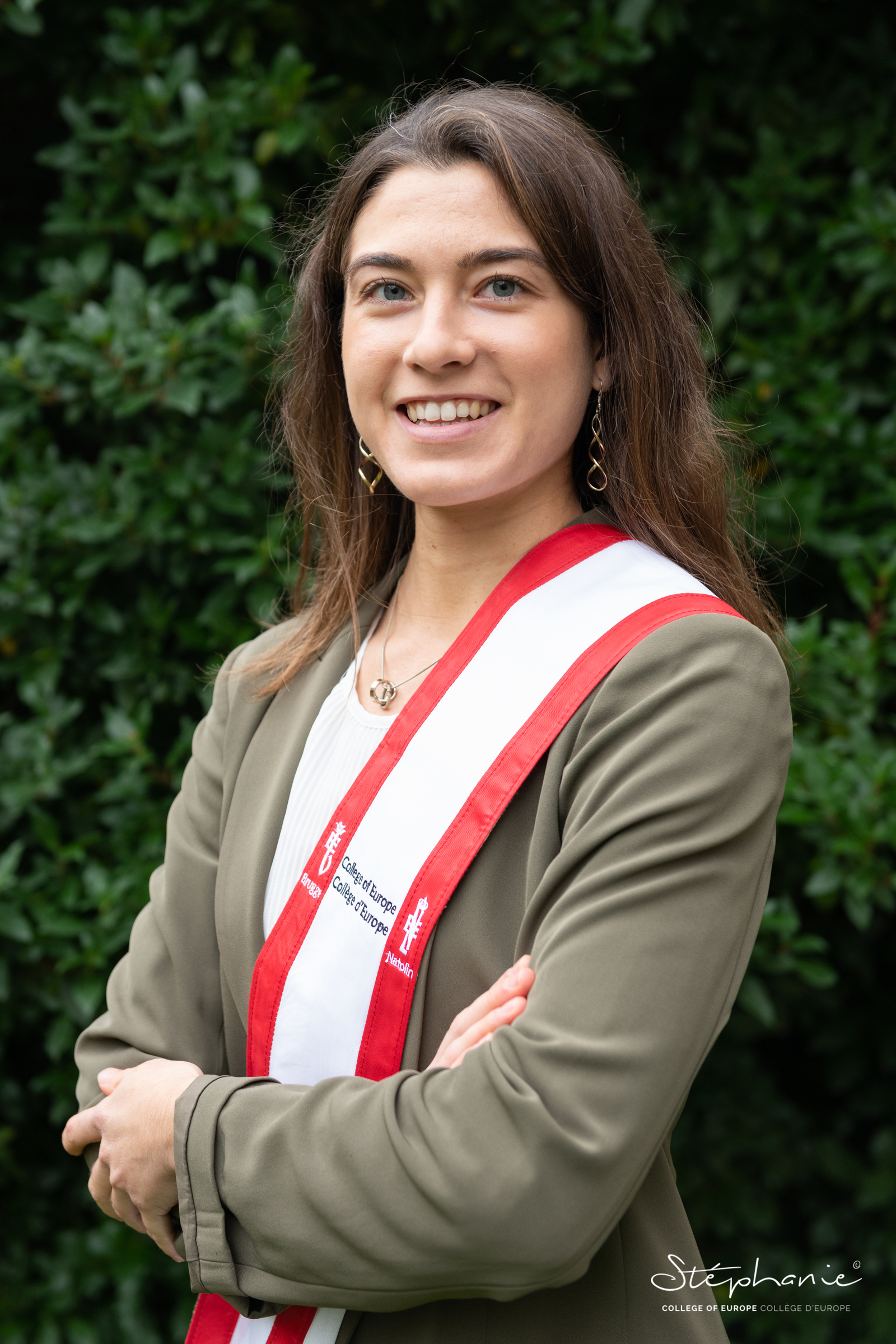 I am a Spanish student of European Economics Studies, focusing on European Public Policy Analysis. I graduated in Economics in Sevilla, following an Erasmus in Leuven and a master’s in public policy and development from Toulouse School of Economics. I have always been passionate and engaged in EU-related activities, including leading a European student think-tank, teaching “Economics of the European Union”, and completing a traineeship in the European Commission.

Being able to live in five EU countries has strengthened my understanding of the advantages of building a stronger Europe. I am enthralled with the role that the EU has in leaving no one behind through social policies towards equality, prosperity, and well-being. Areas in which I put my main focus. 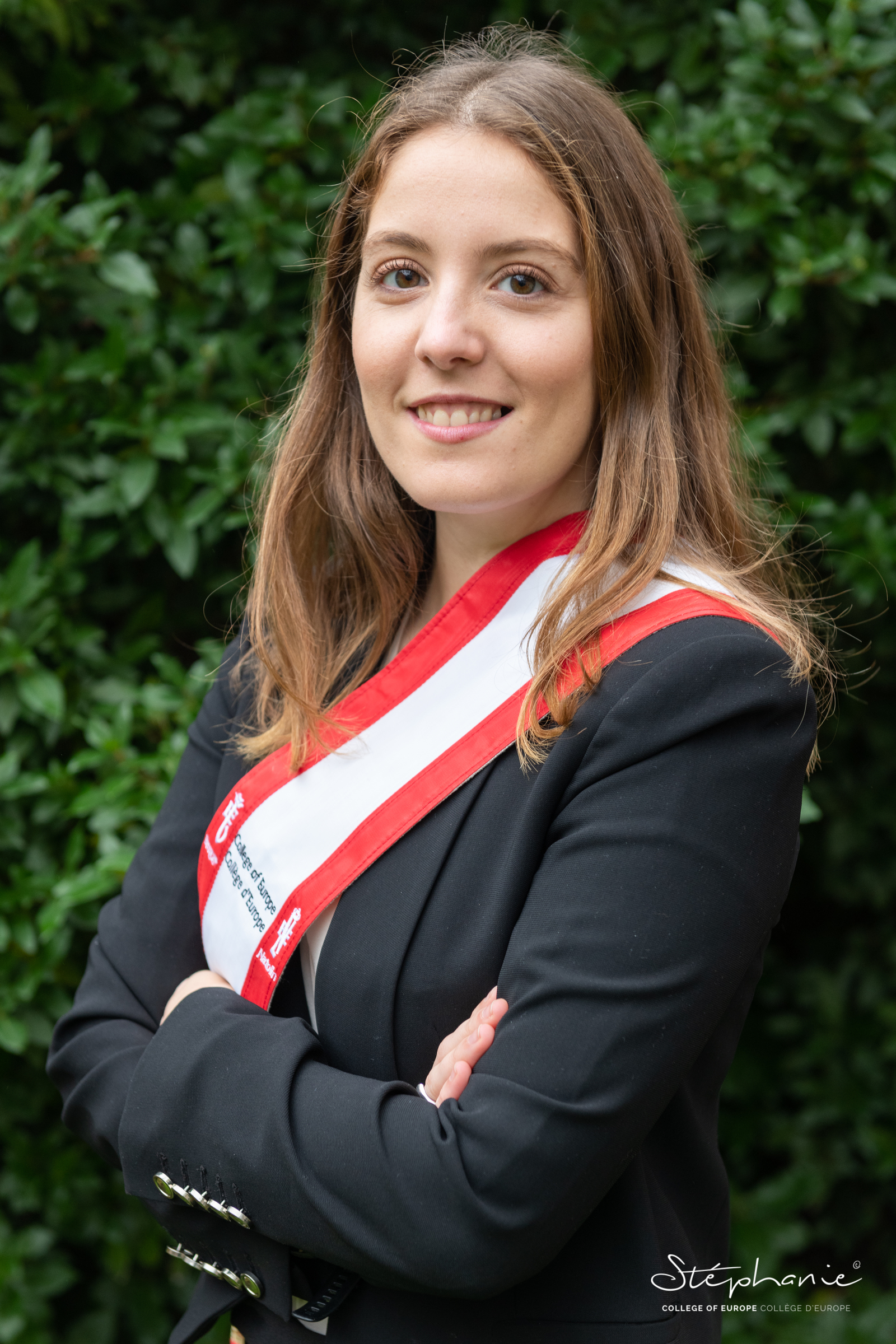 I am a European citizen originally from Portugal and I am currently studying EU International Relations and Diplomacy.

Before the College I was an Information and Communication Assistant at the European Commission’s Directorate-General for Communication. Prior to that I was a Blue Book Trainee at the Commission, a political diplomacy trainee at the Ministry of Foreign Affairs of Portugal, a project development intern in a Brussels-NGO in the field of humanitarian aid, and a Project Manager in Poland.

I am passionate about EU’s external action, security and defence, and diplomacy but also about youth participation in these all these dimensions and processes. Furthermore, I am proudly a Young European Ambassador and an ASEF Young Leader.

As someone who is deeply passionate about the EU, being at the College is not only an extraordinary opportunity but also, given its history, an endless source of inspiration and knowledge that I cannot wait to put into practice in my professional career. 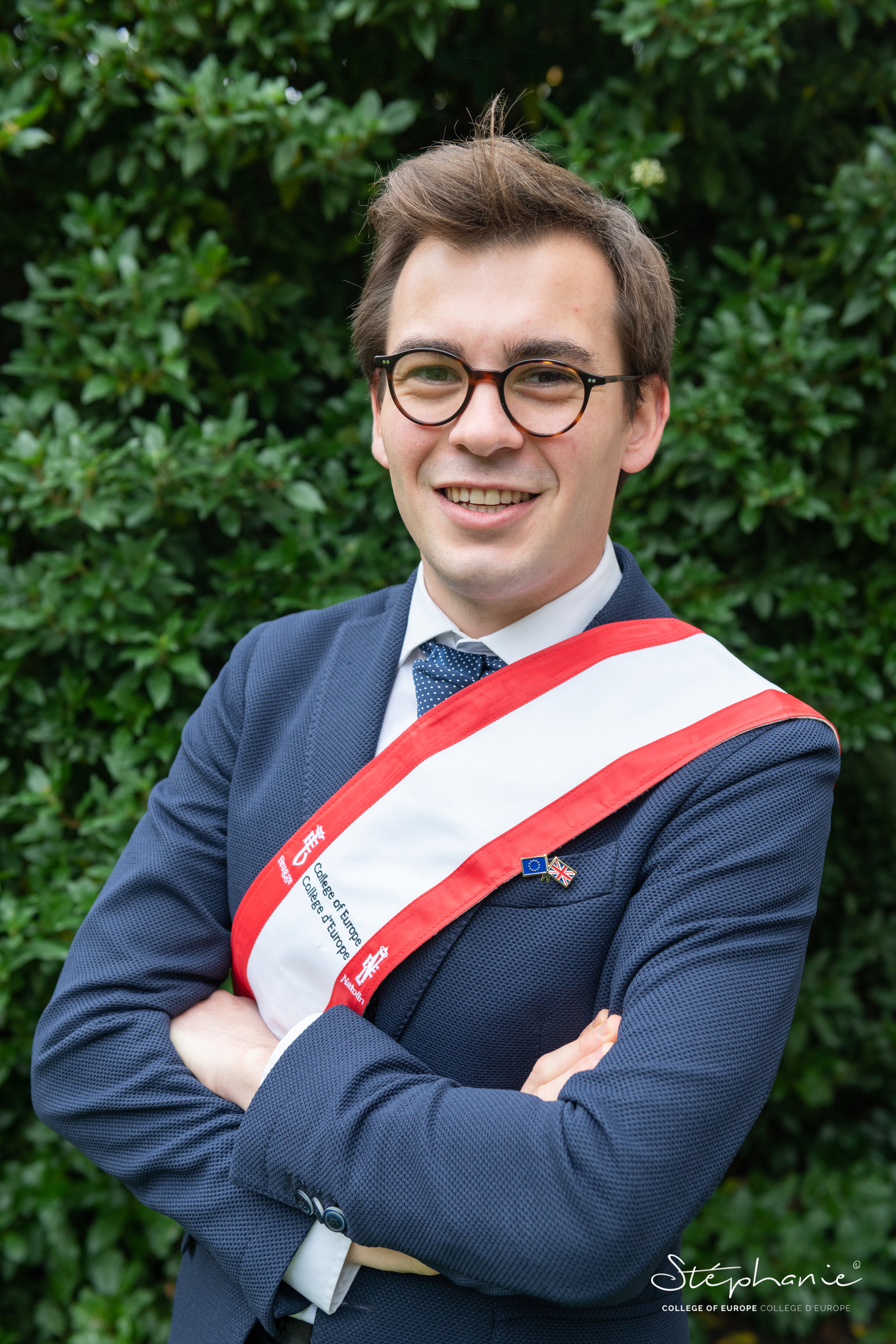 I am a British-Italian dual national studying EU International Relations and Diplomacy. Born in London, UK, I lived near Siena, Italy until the age of 17, when I moved to Balassagyarmat, Hungary to learn Hungarian, and I started to be interested in EU politics. After receiving my ESABAC from an Italian/French dual course, I moved to Canterbury, UK to study Politics and International Relations at the University of Kent. I was very active in student life through the organization of high-profile guest-speaker events, campaigning for students' rights, and I completed an internship at the European Commission Permanent Representation to the UK in the summer of 2018. I did my Erasmus at Bogazici University in Istanbul, Turkey, and then moved to Brussels for a traineeship at APCO Worldwide, working in research, climate, and tech policy until September 2019. After graduating from Kent, I moved to London in 2020 to study for an MSc in European Public Policy at the London School of Economics (LSE). I also worked for two think tanks based respectively in Rome and Naples, writing articles, creating podcasts and helping organize events. Climate and energy diplomacy, and EU-UK and EU-Turkey relations are my main areas of interest. 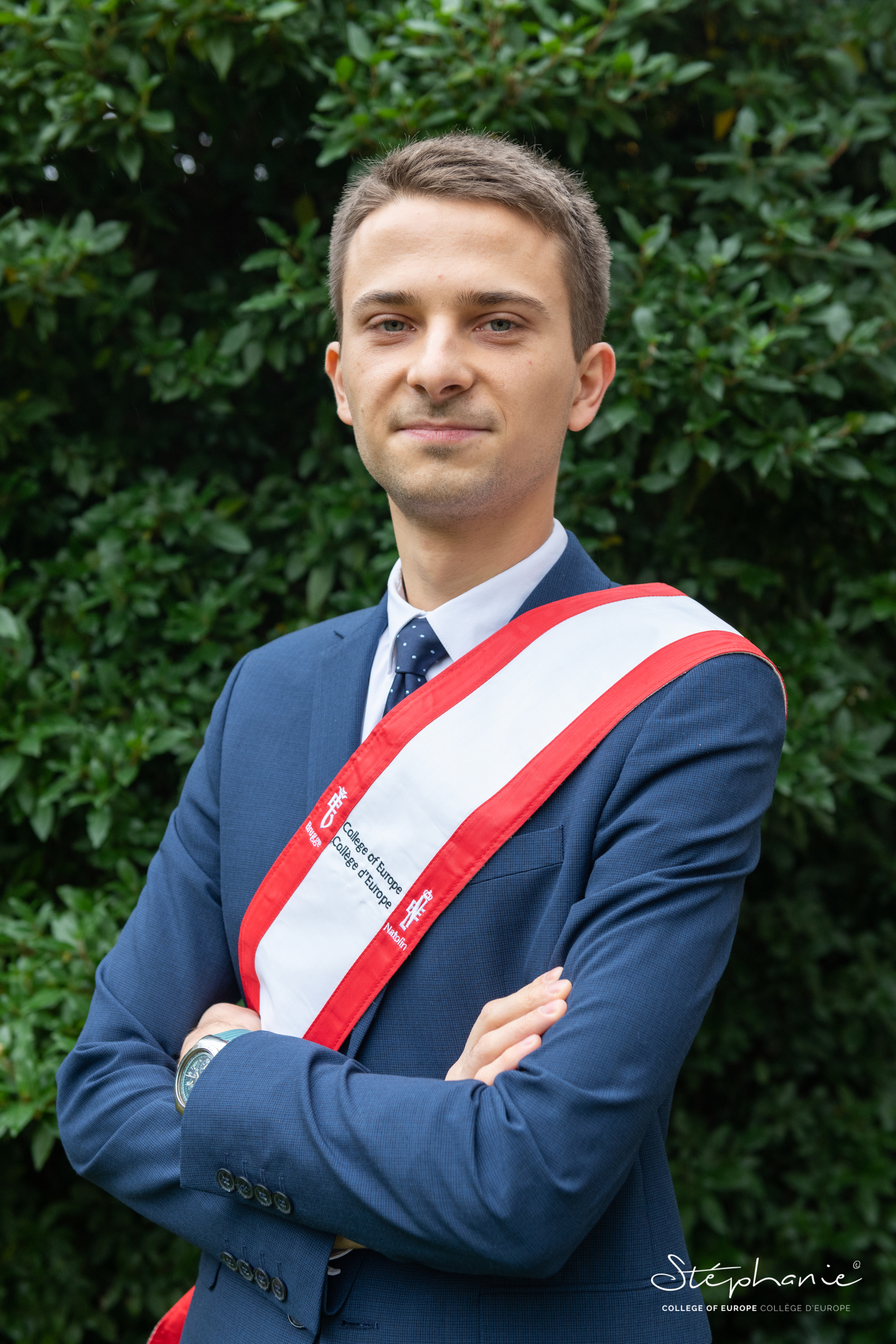 My name is Dimiter, I come from Bulgaria and I am studying Law in the College.
After graduating at a French High School in Sofia, I went in France to start my Law studies. I did my Bachelors at University Jean Moulin Lyon 3, and then a Masters in European Business Law there. I had to chance to study in Leiden Law School in the Netherlands, during the first year of my Master degree. All of this experience and my passion about EU law, make me feel like a true European.
I did some internships in both, public and private sector. An area in which I have a particular interest is the Rule of Law in Europe and its challenges.

As hobbies, I like skiing, traveling and hanging out with friends. 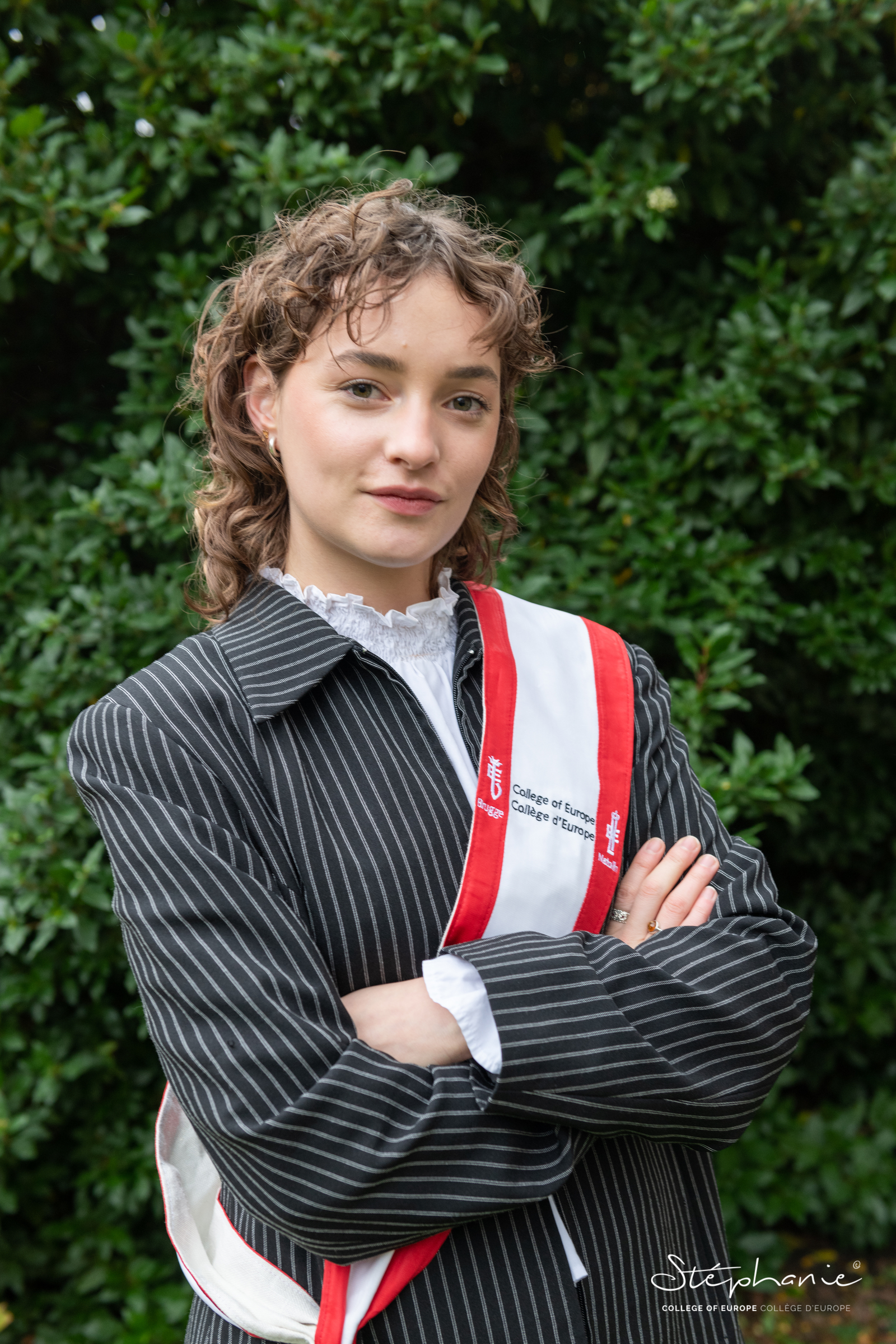 I am a German/New Zealand national, who grew up between Germany and Denmark. I subsequently moved to Groningen, the Netherlands, where I completed two bachelors – in International and European Law and in Philosophy of Political Science.

I have always had a keen interest in the European Union, having profited from it throughout my upbringing and academic career, so coming to the College of Europe to study European law was a natural choice for me. I am particularly interested in the fields of migration and asylum law, data protection and access to justice within the EU. 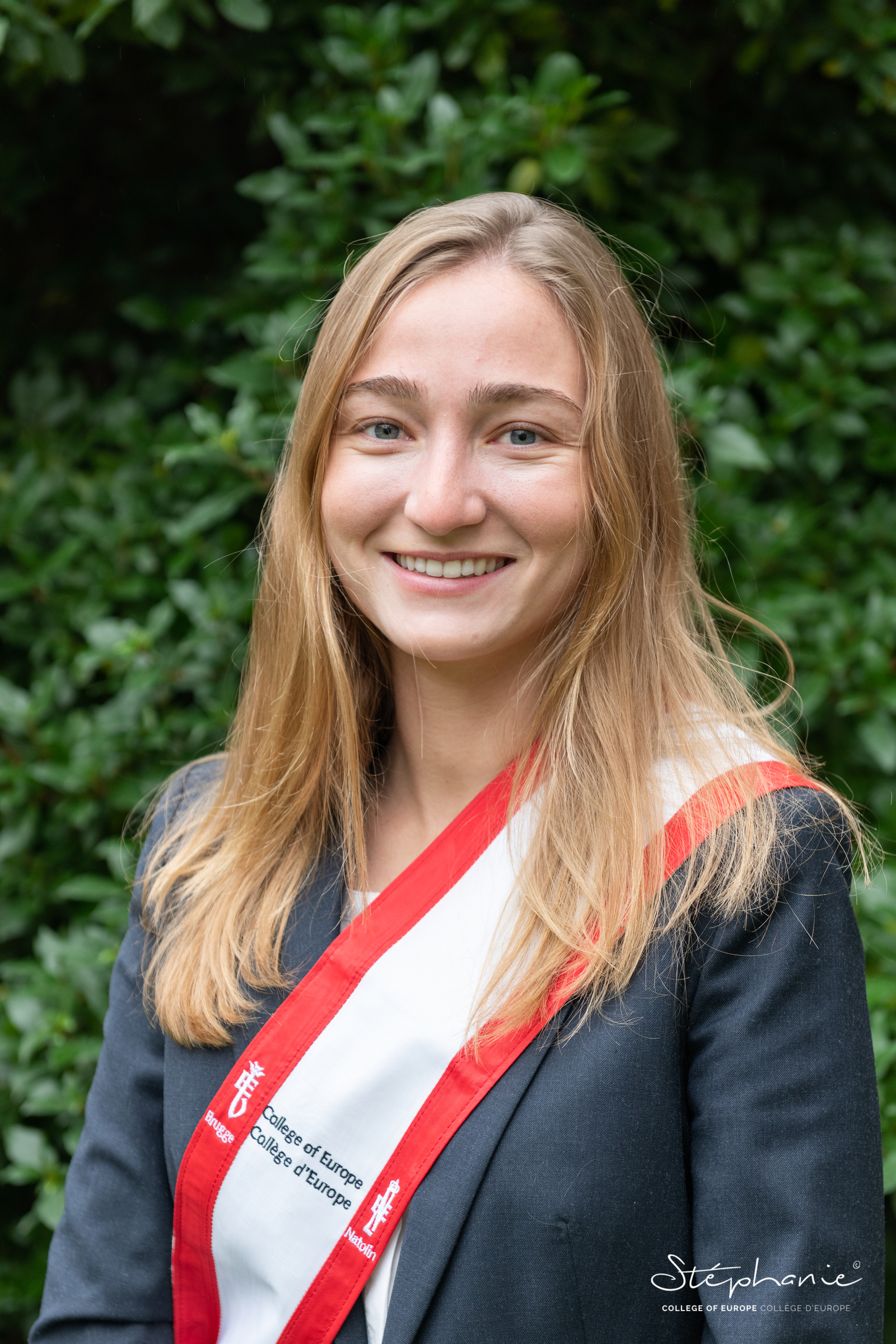 I am a Spanish national studying a Master’s degree in Transatlantic Affairs with a specialization in EU International Relations and Diplomacy. Having grown up in-between Barcelona, Madrid and the United States, I have always felt familiar to the European way of life and the US’ influence in the world. With a background in Business Administration and International Relations from IE University, I became focused on EU politics after completing my ERASMUS at Sciences Po Paris, and joining a pro-European youth organization. I completed an internship at the Spanish Foreign Affairs Ministry, and a policy trek to Israel and the Palestinian territories. As I am Interested in diplomacy, security and conflict studies, the College of Europe represents an incredible opportunity to better understand the EU and work towards its full potential. 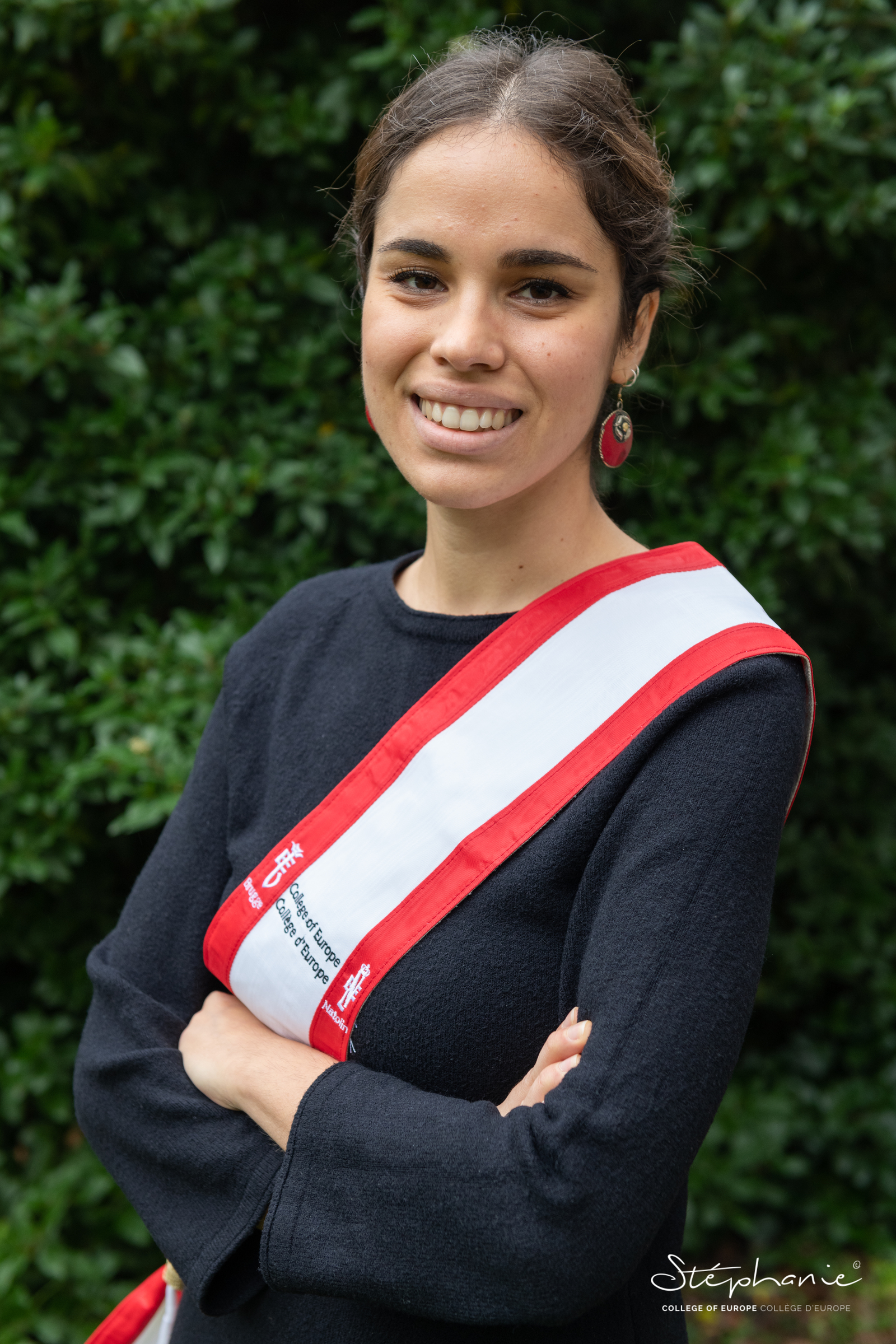 I am an Italian national enrolled in the European Politics and Governance Studies’ program, in the framework of which I intend to continue pursuing my strong interest in European migration policy.

After completing an exchange year in the USA while in high school, I obtained a Bachelor’s degree in International Studies from the University of Trento, Italy. During my Bachelor’s, I have also been an Erasmus student at the Université Paris 1 Panthéon-Sorbonne, as well as a trainee for an EU-funded project in Barcelona, Spain. I then completed a Double Master’s Degree in “Crossing the Mediterranean: towards Investment and Integration” jointly offered by Ca’ Foscari University of Venice and Université Paul Valéry Montpellier 3, during which I spent a semester doing research at the University of Sousse, Tunisia. I finally moved to Brussels to be a Justice and Home Affairs intern at the Permanent Representation of Italy to the EU and then work as a Junior Project Officer for an international NGO primarily focusing on refugees’ integration and resettlement.

Studying at the College of Europe thus represents a great opportunity to acquire key knowledge and skills to keep working for a just and inclusive European Union. 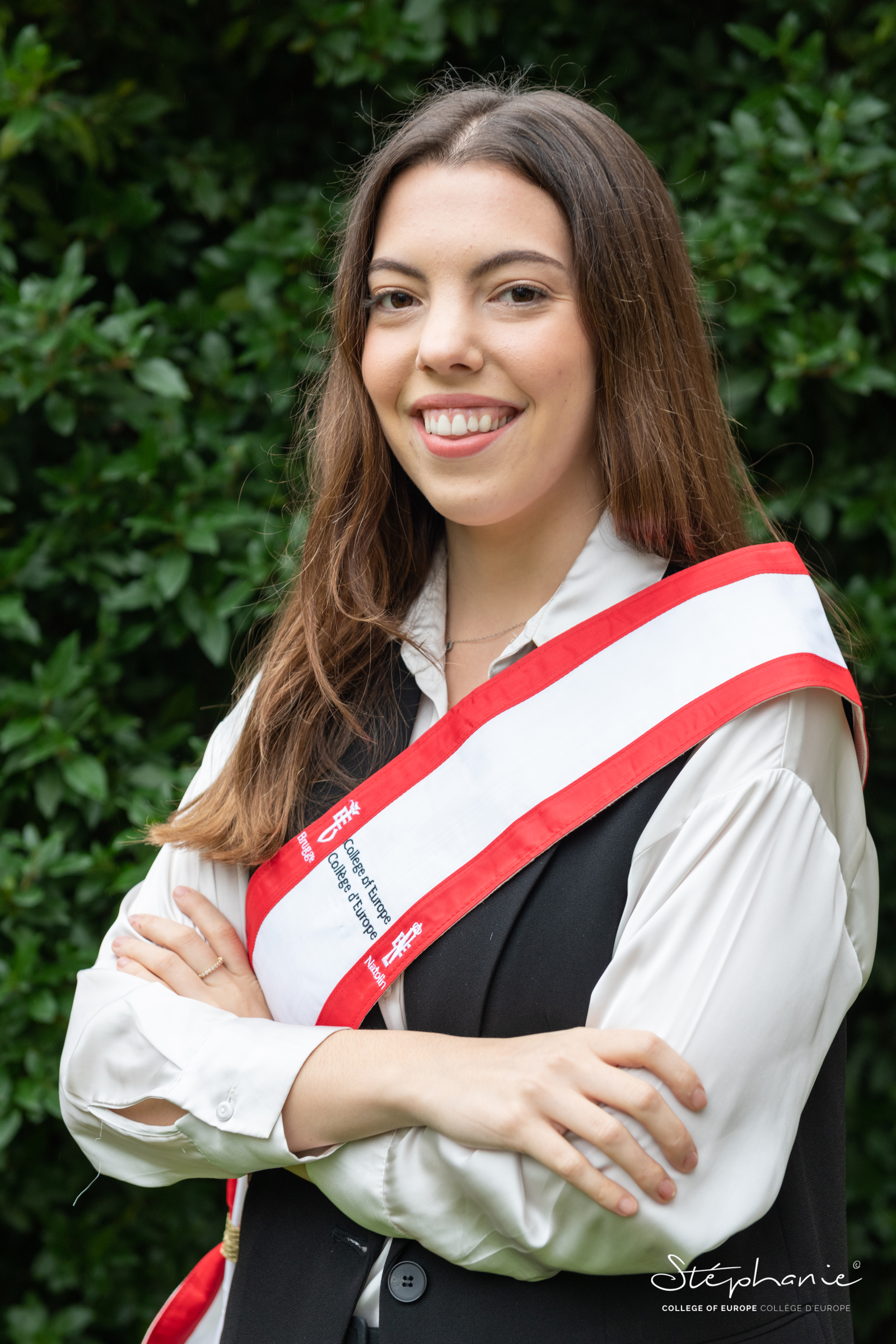 I am a European Politics and Governance Studies’ student originally from Spain. At the College I hope to specialize in environmental policy and a social green transition, my two biggest interests since completing a Schuman traineeship at the European Parliament Liaison Office in Madrid last year.

I studied the international Baccalaureate program in the UK in an international boarding school, giving me the chance to grow in a European environment which deeply shaped my understanding of politics and international relations. In 2015, I started a five-year dual bachelor's degree in International Studies and Political Science at the University Carlos III in Madrid, which I completed with an exchange year in New York. It was during my time outside Europe that I better comprehended the relevance of the European Union. During the Covid-19 crisis the European project and its crucial importance as I understood its potential to push forward a green and social Europe.

We would like to congratulate our 9 Student Reps on their election! Find out their common goals for this year:

"As student representatives, we highly value sharing the journey that is the College of Europe with our fellow students.

As student representatives we hope to enhance students' wellbeing while collaborating with the College to meet the high academic and professional standards it set for itself.

Therefore, we are committed to ensure that no student is left behind in terms of learning, establishing a routine, so that the College experience leads students to build successful careers in respect of our shared values.

Furthermore, we want to ensure the best preparation for our fellow students’ futures in the job market, be it the public or private sector, by working on providing students with a good network of future employers, and to enhance their skills, for example, through frequent use of digital tools throughout the academic year." 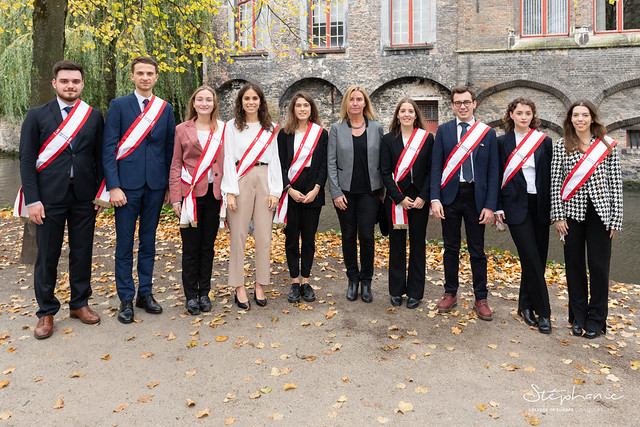