From Monday 24 to Friday 28 January 2022, the MENA Society of our Bruges campus organised a Student National Week highlighting the Middle Eastern and North African culture and traditions.

During the MENA National Week, the Lebanese Diplomat Ralph MATAR gave a conference about the future of the Lebanese singularity. The conference was followed by a wine tasting of the best Lebanese wine and Lebanese sweets.

There was also much dedication to the cultural heritage of Palestine. For example, students were invited to participate in a Palestinian folklore dance; traditional songs were sung live by Randa Far, dressed up in traditional Palestinian attire; and in terms of culinary experience, many foods such as hummus and Zatar were brought for tasting.

In light of the preparations for COP27, His Excellency Ambassador Badr ABDELATTY gave a talk about the efforts of the Egyptian government and its partners to make the green transition a reality in Africa. The talk was followed by souvenir giveaways and Egyptian desserts.

And finally, an online panel discussion was also held on the 28th of January with the authors of the book Fear No More, along with the Tunisian Ambassador to the EU and the former Ambassador of Italy to Tunisia during the revolution, to reflect on the ongoing challenges in Tunisia following the revolution and their implications for the European Union. The debate was moderated by Francis GHILES, one of the top Euro-Mediterranean Experts. Tunisians also organized a very hot and spicy Harissa contest where the winner got some special gifts from Tunisia.

Students also enjoyed an amazing lunch at the Canteen with food from Morocco, Tunisia, Lebanon, Palestine, Algeria, and Egypt, followed by booths of Tunisian and Moroccan delicacies and gifts. 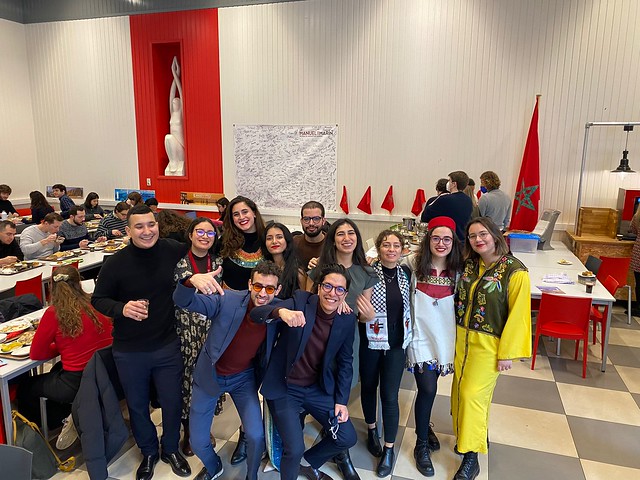