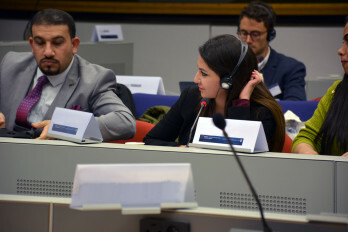 On 30-31 October 2018, the first institutional seminar “The EU system and its projection in the international agenda”, in the framework of the EU-funded project El-Hiwar II, was successfully implemented in Brussels. Institutional seminars were already among the flagship activities supporting enhanced mutual knowledge of the functioning of the EU and the League of Arab States (LAS) during El-Hiwar I (2013-2017) and the project will build on them throughout El-Hiwar II (2018-2022).

For the first edition of the institutional seminar series foreseen under El-Hiwar II, 12 participants coming from several departments of the LAS and the European Commission-League of Arab States Liaison Office (ECLASLO) joined. The seminar focused on the history of European integration, the EU decision-making process in external relations and the EU as a global actor. The participants also had the opportunity to discuss the future of EU-Arab relations with EU representatives and experts during a roundtable. They subsequently had an exchange with representatives of the European Parliament during a visit at the European Parliament, as well as with EEAS representatives and counterparts.

El-Hiwar is a programme aimed at facilitating dialogue, cooperation, and collaboration between the League of Arab States and its Member States and the European Union. Several activities in addition to the institutional seminars will be put into place during this phase: policy dialogues, sectoral training courses, briefing sessions, and working breakfasts.

Stay tuned! Read here about the launching event of the second phase of the project.
Read about the El-Hiwar I here.
See the Flickr album of this seminar below: 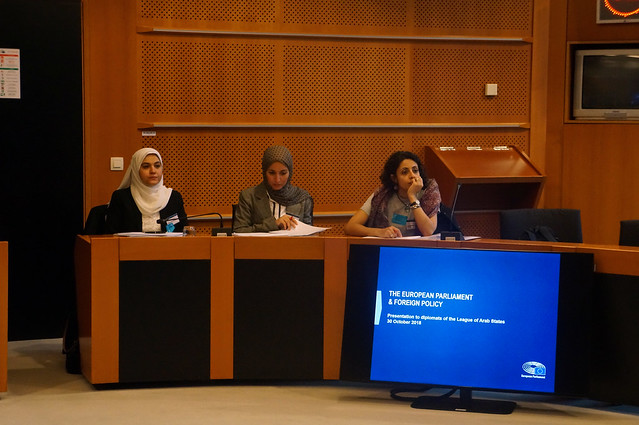 El-Hiwar II: Training and Information Course on Euro-Arab Diplomacy, is a project funded by European Commission DG NEAR and implemented by the College of Europe. It is conceived as a dialogue tool for the EU and the LAS to support strengthened work relations and to learn about each other's functioning, mechanisms and policies.

Should you need any further information do not hesitate to contact us at elhiwarii@coleurope.eu

See more information about our projects: coleurope.eu/projects
All NEWS from the College of Europe

On 30-31 October 2018, the first institutional seminar “The EU system and its projection in the international agenda”, in the framework of the EU-funded project El-Hiwar II, was successfully implemented in Brussels.