On November 8th, the Bruges library team organised the second Library Talk on this academic year’s patron with the title “Eliane Vogel-Polsky, a creative lawyer: anti-discrimination law and political action to foster gender equality in the EU".

In her inspiring speech she highlighted the following key ideas which were characteristic of Eliane Vogel-Polsky’s vision on law : legal feminism, strategic litigation, anti-discrimination law, political action and (parity) democracy.

As, according to Eliane Vogel-Polsky, anti-discrimination law had been designed to fail, it was necessary for her to engage in politics. She also fostered new ways of looking at democracy. Her priority was a social Europe that included gender equality.

The three personal messages Ms. Irigoien, deeply inspired by our patron, had for our students were 1) to persist and believe in our ideas, 2) to use our knowledge for our objectives and 3) to be close to people’s lives.

In the Q&A session afterwards, the students showed by their questions and comments that they were touched by this lecture. They asked if Eliane Vogel-Polsky introduced other cases like “Defrenne” and whether she faced much opposition and criticism. They also wondered what the biggest issues are nowadays for their generation to tackle in the field of gender equality. Making the comparison with Ruth Bader Ginsburg, they were surprised that Eliane Vogel-Polsky is much less known. The conclusion was that, although women in power do not always openly express themselves as feminists, there is a paradigm change towards the “feminist lens”. 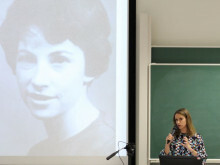