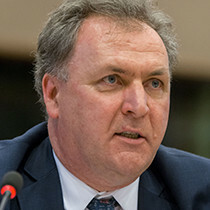 David Phinnemore (UK) is Professor of European Politics and Jean Monnet Chair in European Political Science in the School of History, Anthropology, Philosophy and Politics at Queen’s University Belfast in Northern Ireland, and Fellow of the Academy of Social Sciences.

He holds a BA in European Studies (1990) and was awarded his PhD in European Studies by the University of Kent at Canterbury in 1998. His teaching interests are focused on the European Union – notably its institutions, decision-making procedures, external relations and enlargement. Much of his current work is focused on the process and implications of Brexit and the consequences of Brexit for the EU and especially for Northern Ireland and the island of Ireland more generally.

David Phinnemore’s research interests cover EU treaty reform, EU enlargement, EU external relations, particularly association, and Brexit and its implications particularly for Northern Ireland and for EU external governance. He is currently coordinating a three-year ESRC-funded project on Governance for ‘a place between’: The Multilevel Dynamics of Implementing the Protocol on Ireland/Northern Ireland.

The research has resulted in a range of publications, notably: The Proliferation of Privileged Partnerships between the European Union and its Neighbours (Routledge, 2019) (edited with S. Gstöhl); The Treaty of Lisbon: Origins and Negotiation (Palgrave Macmillan, 2013); The European Union’s 2007 Enlargement (Routledge, 2012, edited with C. Chiva); Reflections on European Integration: 50 Years of the Treaty of Rome (Palgrave, 2009, edited with A. Warleigh-Lack); Romania and the European Union: From Marginalization to Membership (Routledge, 2008, with D. Papadimitriou); The EU and Romania: Accession and Beyond (editor, London: Federal Trust, 2006); Understanding the European Constitution: An Introduction to the EU Constitutional Treaty (Routledge, 2005, with C.H. Church); and The Penguin Guide to the European Treaties Penguin (Penguin, 2002, with C.H. Church). He has also contributed chapters to a range of edited volumes and published articles in the Journal of Southern Europe and the Balkans, Journal of Common Market Studies, Journal of Contemporary European Studies, Journal of European Integration, European Foreign Affairs Review, Revue d’Etudes Comparatives Est-Ouest, Southeast European and Black Sea Studies, and Perspectives on European Politics and Society.