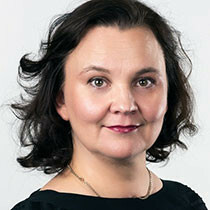 Hanna Smith (FI) is senior strategic adviser to the Secretary-General of the Organization for Security and Co-operation in Europe (OSCE) in Vienna. From 2017 to 2022 she was Director of Research and Analysis at the European Centre of Excellence for Countering Hybrid Threats in Helsinki. She is an expert on hybrid threats, Russia and Eurasia as well as great-power identity and geopolitics. Before joining the Centre, she was a Research Fellow at the Aleksanteri Institute, University of Helsinki, and she has acted as an expert to different parliamentary committees. In 2006 she was part of the policy planning unit of the Finnish Ministry of Foreign Affairs. Hanna Smith has, amongst others, taught courses at the University of Helsinki, the University of Eastern Finland and the European Security and Defence College (ESDC). She holds a PhD in Political Science from the University of Helsinki, an MA in Russian Studies from the University of London and an undergraduate degree in East European Studies and International Relations from the Universities of Stockholm and Uppsala. She regularly comments on hybrid threats, Russia and international affairs both in Finnish and international media.

Her research interests include world politics, security studies, international institutions and international relations. She has published numerous articles in books, academic journals and newspapers. Her latest publications include “The landscape of hybrid threats: A conceptual model” (European Commission, Ispra, 2020, with G. Giannopoulos and M. Theocharidou), “Military Might as Basis for Russian Great Power Identity” (in The Routledge Handbook of Russian Security, ed. by R. Kanet, 2019) and the volume Strategic Culture in Russia’s Neighborhood: Change and Continuity in an In-Between Space (ed. with K. Miklóssy, Lexington Press, 2019).