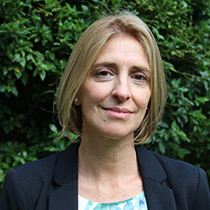 She teaches Spanish at the European Commission and at the European Parliament, as well as at the Instituto Cervantes in Brussels. She is also a teacher trainer of Spanish teachers at Belgian secondary schools (Université Ouverte de la Fédération Wallonie-Bruxelles). She worked several years as a Spanish translator at the General Secretariat of the Schengen Agreement and as a free-lance translator.

In the context of language teaching, one of her major areas of interest is the use of ICTs tools in the classroom. Within this area, she focuses on the practice of learning platforms and creating new educational spaces.