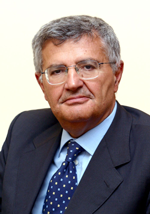 Mario Siragusa is a partner of Cleary Gottlieb Steen & Hamilton LLP, based in the Rome office.

Mario Siragusa’s practice focuses on corporate and commercial matters, particularly European Community and Italian competition law. Mr. Siragusa has extensive experience representing clients before the European Court of Justice, the Court of First Instance of the European Communities, the Directorate General for Competition of the EC Commission, and the Italian Antitrust Authority.  He is a professor at the College of Europe in Bruges and is widely published in U.S. and European publications. He is also distinguished as a leading Competition/Antitrust lawyer by Chambers and Partners Global – The World’s Leading Lawyers.

Mr. Siragusa is a member of the Italian Bar in Rome and the Commission on Law and Practices relating to Competition of the International Chamber of Commerce in Paris. His native language is Italian, and he is fluent in French and English.