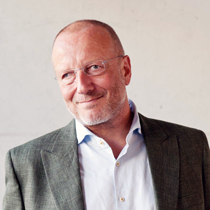 Roger de Weck is a bestselling author, journalist, and podcast host. Previously, he was the Director General of Swiss Broadcasting Corp., Chairman of the Board of the Graduate Institute of International and Development Studies in Geneva, and Editor-in-Chief of the German weekly «Die Zeit».

Bilingual in French and German, de Weck studied economics at the University of St. Gallen and lives in Zurich. Amongst others, de Weck is part of the Foundation Board of the International Charlemagne Prize of Aachen, the Scientific Council of «Critique internationale» at SciencesPo Paris, and Board member of SOS Méditerranée Switzerland. He holds honorary doctorates from the Universities of Lucerne and Freiburg.