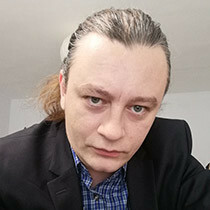 Vladimir Zherebov (BE, native Russian) is visiting language professor for Russian at the College of Europe.

He holds a PhD in Slavic and Eastern European Studies from the University of Leuven (KU Leuven). Born in the Urals in the last decade of the existence of the Soviet Union, he witnessed the times of Perestroika and obtained his first Master’s degree in Russian Language and Literature at Bashkir State University in Ufa. He moved to Belgium in 2008 to pursue an academic career in Europe.

Vladimir Zherebov worked at the Department of Russian and Eastern European studies of KU Leuven as a language professor and developed Russian-related courses at the Centre for Russian Studies. In 2017 he joined the team of Russian language teachers at the Russian Center for Science and Culture in Brussels, and in 2019 he became a head of the CIS expertise pillar at the Brussels Diplomatic Academy (VUB). Besides his teaching duties, he holds the position of researcher at the Department of Cultural Studies at the University of Leuven and leads and develops various educational programmes, both as an independent specialist and in cooperation with various cultural and scientific organizations.