The European perspective of the response to disinformation was presented las week by Professor Carme Colomina in Chile. 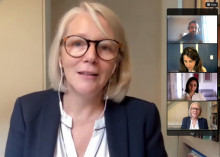 Last week, Professor Carme Colomina participated in a colloquium organised by the College of Europe in Chile, inviting the audience to reflect on the power of disinformation in electoral contexts. At a time when Chile is moving towards a new Magna Carta, this event has been very important to understand the "fake news" phenomenon as a global trend in permanent evolution.

Disinformation, as a threat to the democratic system and its disruptive power in electoral processes, has challenged the European Union and its Member States to propose new legislative debates and to establish new strategies for communication, verification and the development of new information strategies. College of Europe’s Visiting Professor Colomina made the audience reflect conceptually on the capacity for dispersion of misleading narratives and the relativisation of the idea of truth. Participants were also introduced to the very different challenges between Member States, the learning process of the European Union during this ongoing effort that started in 2015, and the consequent evolution of the European multi-directional actions.

Dr Pamela Figueroa, from the Institute of Advanced Studies of the USACH and Academic Coordinator of the Observatorio Nueva Constitución, also participated in the colloquium; sharing the similarities between the Chilean and European challenges and the need to move towards an institutional framework and protocols for action, as has been the case in the European Union.

Below you can watch the interview that Professor Colomina gave to the Chilean media:

This activity took place in the framework of the EU-funded project "EU Policy and Outreach Partnership in South America - Brazil, Argentina, Peru, Colombia, Uruguay, Chile". The College of Europe is a partner of the Consortium implementing the project under the coordination of the Organisation of Ibero-American States (OEI).

More information about our projects.

All news from the College of Europe Development Office.