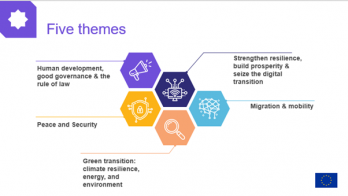 The EU-funded El-Hiwar II project organised on 24 March 2021 an online briefing with the League of Arab States Secretariat (LAS) on the EU’s new agenda for the Mediterranean.

The European Commission and the High Representative of the Union recently adopted a joint communication aiming to relaunch and strengthen the strategic partnership between the EU and its Southern Neighbourhood partners.

A cross-departmental group of League of Arab States staff members joined the briefing to exchange on this new agenda and discuss possible areas of convergence.

In their introductory remarks, the speakers delineated the reasons that led to the preparation of this joint communication, the key thematic priorities as well as the accompanying Economic Investment Plan and its concrete flagship projects.

Both speakers highlighted the importance of joining forces to address common challenges such as generating green growth, supporting economic recovery and development, seizing the digital transition, amongst others.

The EU representatives further stressed the importance of working with regional organisations such as the League of Arab States. Although the geographical scope of the Joint Communication covers only part of the Arab region, both EU speakers underscored that enhancing inter-regional and trilateral cooperation is a key objective of the new Agenda. Another important element is that the Neighbourhood, Development and International Cooperation Instrument (NDICI) – ‘Global Europe’ financial instrument puts the focus on regional and cross-regional cooperation.

El-Hiwar II: Training and Information Course on Euro-Arab Diplomacy, is a project funded by DG NEAR and is conceived as a dialogue tool for the EU and the LAS to support strengthened work relations and to learn about each other's functioning, mechanisms and policies.

More information about the project: www.coleurope.eu/elhiwarii
All NEWS from the College of Europe Development Office