On 14-15 October 2021, the Department of EU International Relations and Diplomacy Studies at the College of Europe, Bruges campus, held an international conference to discuss the European Union’s role in the governance of contested global spaces.

In recent years, several ‘global spaces’ have (re-)emerged as key theatres of political and legal contestation: the Polar regions, the High Seas (including maritime security and deep seabed mining), the atmosphere (in particular climate change), cyberspace and outer space. In many respects, most of these spaces are among the ‘last frontiers’ of global politics and international law-making. They find themselves thus at the heart of current debates about global governance. As ‘global commons’, most of these global spaces are beyond sovereign jurisdiction and warrant special protection. Controlling them promises security-related and/or socio-economic advantages. Simultaneously, their unsustainable use enhances the risk of transnational conflict and environmental damage. The fact that the North Atlantic Treaty Organization has established space (in 2019) and cyber (in 2016) as ‘operational domains’ in addition to land, sea and air underscores their growing strategic importance as potential loci of geopolitical rivalry.

With its commitment to effective global governance and to a global order based on international law, the European Union has increasingly been trying to profile itself as a distinct external actor in these global spaces, alongside major powers like the United States, Russia and China. Whereas the EU and its members have long been key players regarding the fight against climate change, their strategic engagement regarding the other spaces is much more recent. As set out in the 2016 EU Global Strategy, the Union’s external action is to be guided by ‘principled pragmatism’ – combining a realistic assessment of the strategic environment and an idealistic aspiration to advance a better global governance. The Strategy underscored the EU’s “interest ... in sustainable access to the global commons through open sea, land, air and space routes” and “a free and secure Internet”. This self-interested view resonates with the von der Leyen Commission’s desire, reinforced by the Covid-19 pandemic, to make the Union a ‘strategically autonomous’ geopolitical actor. At the same time, the EU is to “promote multilateral solutions to common problems” and ‘an international system based on stronger multilateral cooperation and good global governance” (Art. 21 TEU). In its approach towards the global spaces, the EU thus needs to reconcile a power- and interest-based stance with a value-driven approach based on international law.

This international conference explored the EU’s evolving role in the governance of several of these contested global spaces from both political science and legal perspectives. It focused on the following key guiding questions:

In addressing these questions, the conference sought to bring into dialogue scholars with practitioners of EU external action. Its aim was to advance both the practical-political debate about the most appropriate ways in which the EU can strategically act in the interest of European and global citizens and the academic debates in EU External Action Studies and International Law about how the EU can reconcile its geopolitical profiling and the pursuit of its own interests with longer-term aspirations regarding global governance.

On Thursday, 14 October, at 17h00, the conference was launched by the Department’s annual EU Diplomacy Lecture  which was this year delivered by the EEAS Ambassador at Large for Climate Diplomacy Marc VANHEUKELEN on “EU Climate Diplomacy: Projecting Green Global Leadership”.

The conference was open to all College of Europe students and to the public. 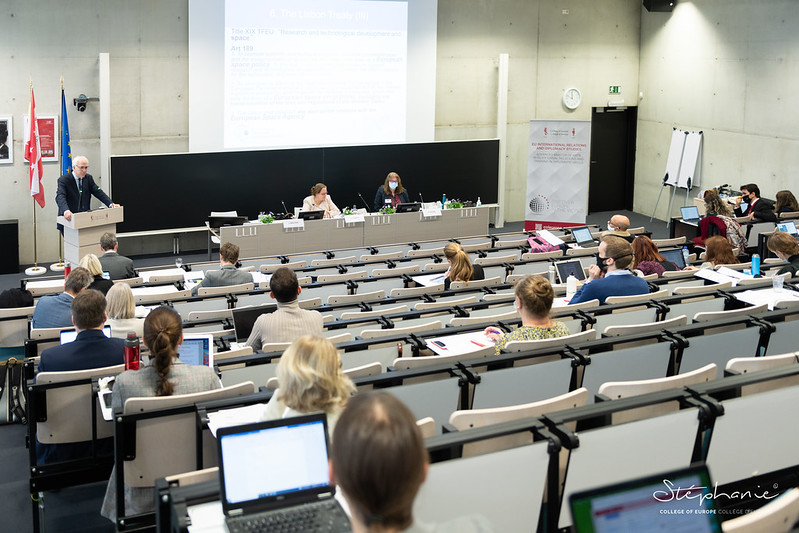