Jacques Bourgeois is a counsel in the law firm WilmerHale where he advises on all aspects European Union law, specifically in relation to EU competition matters and international trade law.

From 1983, Mr. Bourgeois was a senior official with the European Commission, then principal legal adviser of the Commission in charge of foreign trade policy and, later, competition policy. He served as head of the Trade Policy Instruments Division in the Directorate General for External Relations responsible for the implementation of the EU's regulations on antidumping and subsidies, safeguard measures and protection against illicit commercial practices. Mr. Bourgeois originally joined the Commission as a member of Legal Service in 1965 as a legal advisor to the Commission responsible for personnel issues, matters of institutional domain, agriculture and fisheries policy, and external relations.

Mr. Bourgeois is a member of the board of Europees Instituut, the board of the Foundation for Scientific Research and Educational Exchange, and the Scientific Board of St. Gallen University and of the Academic Council of the College of Europe. He is also a member of the Institut Royal des Relations Internationales and the International Law Association.

Mr. Bourgeois is member of the board of editors of Sociaal Economische Wetgeving, a Belgo-Dutch European law review, the Journal of World Intellectual Property and La Revue du Droit de l'Union européenne, and of Journal of European Competition Law and Practice. Mr. Bourgeois is the author of numerous articles and has edited several books on European Union law and international trade law. 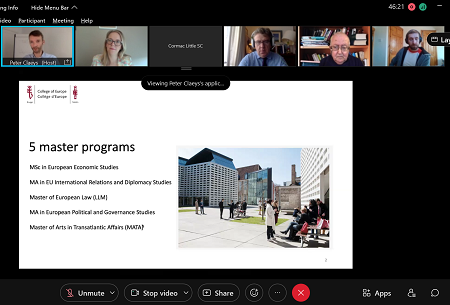 On Wednesday the 5th of January 2022, the European Economic Studies Department of our Bruges campus and the European Movement Ireland jointly organised an online information session for prospective...
Read more
END_OF_DOCUMENT_TOKEN_TO_BE_REPLACED