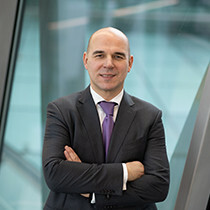 Gabriel Glöckler studied Philosophy, Politics and Economics at Oxford University (St. Edmund Hall) and holds a Master’s degree from the College of Europe (Promotion Alexis de Tocqueville 1996/97). After having worked as an Academic Assistant at the College’s Department for Political and Administrative Studies, he started his career at the European Central Bank in 1999, initially as Economist. He served five years as Counsellor/Chief of Staff to the ECB’s Vice-President Lucas Papademos before becoming Deputy Head of the EU Institutions Division where he was in charge of the ECB’s interaction with ‘Brussels’, and in that capacity also a member of the EU’s Economic Policy Committee. Thereafter he was Head of the ECB Secretariat and Assistant Secretary to the ECB’s Executive Board and Governing Council. In 2016 he joined the senior management of the ECB’s Directorate General Communication as Principal Adviser, where he focuses on the strategic direction of the ECB’s communicationsm driving innovation in monetary policy commmunication and enhancing the Bank’s outreach towards the general public, politics, and academia. He is a member of the Executive Committee of the Research and Policy Network on central bank communications of the Centre for Economic Policy Research (CEPR).

Since 2013, Gabriel became a Visiting Professor at the College of Europe. He has published widely in refereed journals and books, and is a frequent speaker at academic conferences and public events across Europe; he also appears recurrently in the media. His latest work focuses on the central banking, communications, banking union and the interaction between politics and financial markets.