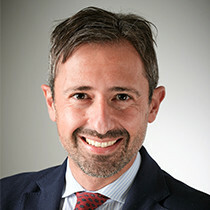 Course offered: Negotiation and Decision-Making in the EU : A Simulation Game (50h) with Jon WORTH and Costanza HERMANIN

Pierpaolo Settembri is an EU official since 2007, currently working as Head of Unit for Coordination and Planning in the European Commission’s Directorate-General for Mobility and Transport (DG MOVE). He is fluent in Italian, English, French and Spanish.

Previous professional affiliations: In the Commission, he worked as Assistant to the Director-General in DG MOVE and as a coordinator for G7/G20 matters and external policies in the Secretariat-General. He previously worked also in the General Secretariat of the Council, dealing with development cooperation and international trade. Prior to joining the EU institutions, he has been a Fulbright Scholar and Global Emile Noël Fellow at New York University, a researcher at the European Institute of Public Administration (EIPA) in Maastricht, a research fellow at LUISS “Guido Carli” in Rome and a teaching assistant at the College of Europe in Bruges.

Education: Political scientist by training (LUISS “Guido Carli”, 2001), he holds a Master in European Politics from the College of Europe (2002) and a Ph.D. in Political Science from the University of Florence and Sciences Po - Paris (2006).

Research interests: His publications on various EU-related topics include several articles in international journals, a co-authored book on learning how EU negotiations work through simulation games (2012), a monograph on the farm lobby in Europe (2008) and a co-edited volume on the impact of enlargement on the EU institutions (2008).