A couple of weeks ago the Natolin students had the opportunity to participate in the Discover Natolin project. It was a series of events, which aimed to introduce them to the Natolin Campus - the place which is their home for the entire academic year, its history, unique nature reserve and sights.

On Sunday, 24 October, the students conducted a 45-minute tour of the Natolin Palace as part of the Discover Natolin tour series. The tours were led by city guide Olaf RYBIŃSKI and began with studying the tulip and cork trees that stand in front of the Palace. Mr RYBŃSKI then led the students into the ground floor of the historic Palace and through the history of the Potocki family, associated with it and the nearby Wilanów royal residence. After visiting the dining room and other ground-floor spaces, the tour continued to the residence's rear before culminating at the historic Natalia monument. Two tours were conducted with significant participation of around 23 students per tour.

On Sunday 31 October, the Discover Natolin series continued with two 90-minute tours of the Natolin forest and nature preserve which envelopes the campus. Both groups of participating students were offered a tour by local guide Konrad DRZEWIECKI to introduce students to flora and fauna, making the Las Natolinski an ecological specificity. The twenty participating students met with Mr DRZEWIECKI at the Palace of Natolin. The tour focused on the various fauna which has made the Natolin reserve their home – among them, various species of bird (including black storks), mammals, and insects. The tour also focused on the different tree species and other forestation in the area, notably pointing out the richness of the Natolin soil and its comparability with the famous Białowieża Forest in eastern Poland. The tours deviated from the stone path which encircles their campus on several occasions, taking care, however, to avoid disturbing the wildlife and the habitats of the animals dwelling in the forest. After one tour of the path, including a brief foray toward the Moresque gate at the rear of the campus, the tours returned to the residential/academic area at the front of the campus, has provided the students the insight they desired and an opportunity to document the various wildlife and vegetation visited.

The visit also served as an opportunity to raise awareness of the need for protection of natural habitats and wildlife, in view of the problems related to climate change, which is being discussed during the ongoing Conference on the Future of Europe, notably during the European Citizens' Panel to be held at Natolin on January 7-9, 2022. 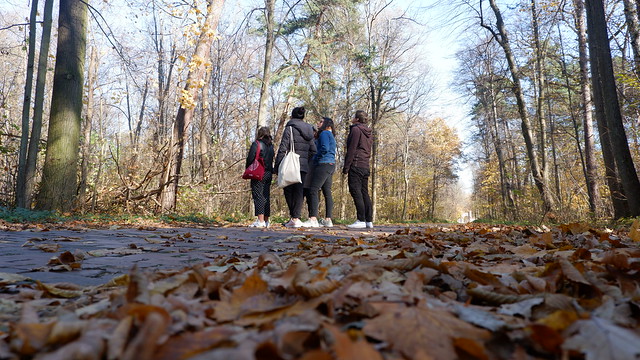