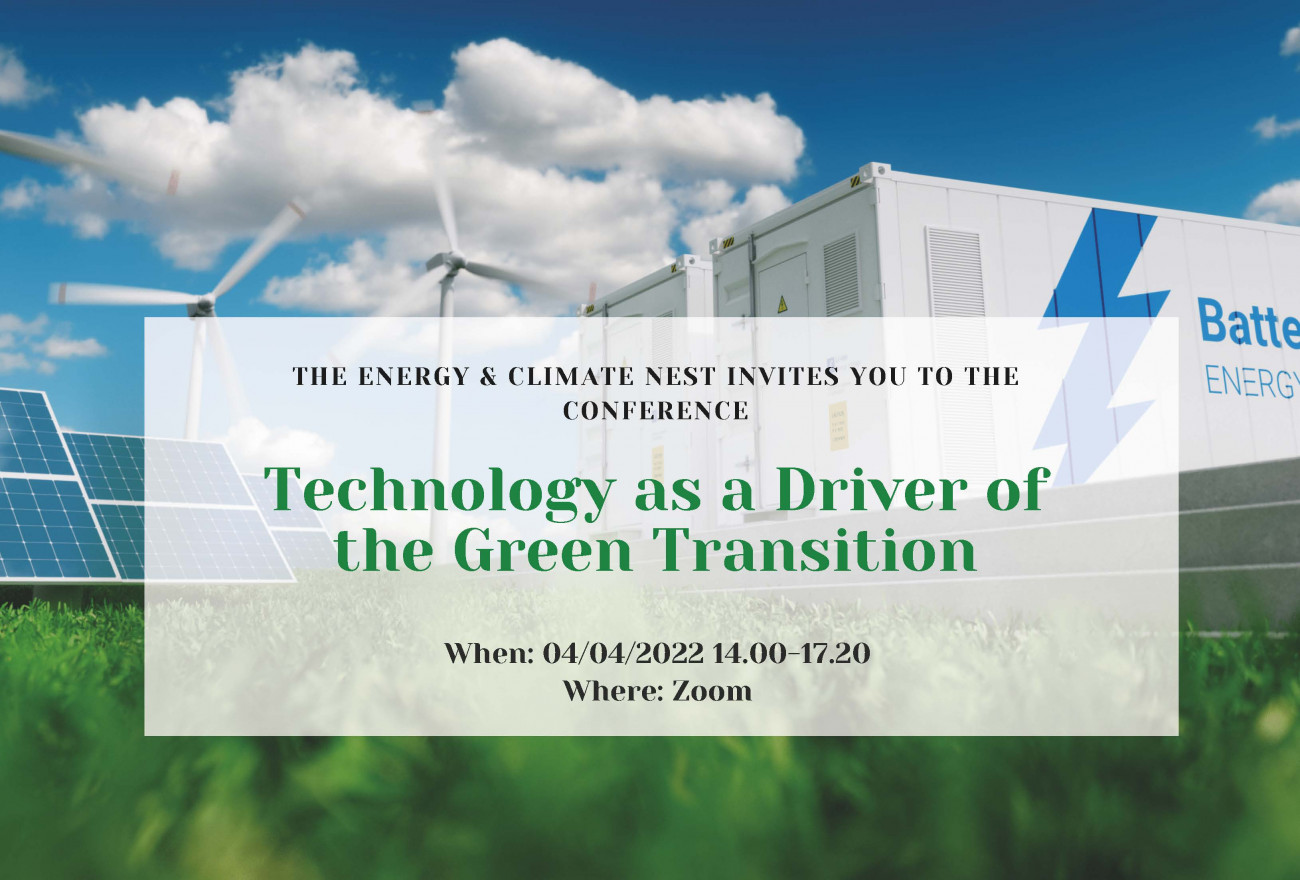 The Natolin Energy and Climate Governance Nest organized an online conference on “Technology as a driver of the green transition" on Monday, 4 April 2022.

The world is faced with significant challenges in the face of global warming and climate change. Technological innovation is understood to be a major accelerator toward accomplishing the global objectives set out in the 2015 Paris Agreement. The European Commission will channel over €25 billion into green technologies by 2030 through its Innovation Fund showing technology’s key role under the European Green Deal.

Speakers from different backgrounds and sectors discussed the policy’s role in supporting technological innovation, the role of technology in the green transition, and the power of digital innovation for climate action.

Opening remarks from H.E. Ambassador Artur LORKOWSKI, Director of the Energy Community Secretariat and Mentor of the Natolin Energy and Climate Nest.

Mr Ruben LAPA MAXIMIANO is a senior competition expert in the OECD Competition Division where he is responsible for the work of the Division in the Asia Pacific Region as Regional Manager. Mr MAXIMIANO also leads the work on Competition, Covid-19 and the economic recovery at the OECD. More recently, he has worked extensively on competition and sustainability and is working on competition and innovation. He is also a lecturer on EU Merger Control at Lille Catholic University. Before the OECD he has worked for 5 years at DG COMP at the European Commission and 4 years at the Portuguese Competition Authority. Prior to that Ruben was a lawyer at Vieira de Almeida & Associados, in Portugal, and Squire, Sanders & Dempsey in Brussels. Ruben holds an LLM from the College of Europe.

Mr Florian FLACHENECKER works as a Policy Officer in the Recovery and Resilience Task Force of the Secretariat-General of the European Commission on environmental issues related to the Recovery and Resilience Facility. Mr FLACHENECKER is also an Honorary Lecturer at University College London  Institute for Sustainable Resources. Previously, he was an Economist at the Joint Research Centre (JRC) of the European Commission, working at the intersection between research and policy, in particular on environmental innovations, the Sustainable Development Goals and firm growth. Florian also worked as an Economist at the Organisation for Economic Co-operation and Development (OECD) on environmental data and policy. Florian obtained a PhD in Economics from University College London and holds a MA in Economics from the College of Europe (Václav Havel Promotion, 2012/2013).

Ms Sophie DONNELLY is a Master's student of Political and Governance Studies at the College of Europe in Bruges, specialising in European Public Policy Analysis. Originally from Dublin, Ireland, Ms DONNELY holds both a B.A. in Philosophy, Politics and Economics and an LL.M. in International Humanitarian Law from Trinity College Dublin. Under the supervision of Prof. Dirk BUSCHLE, European Energy Policy Chair at the College of Europe, and in collaboration with Max SCHULZE of the Sustainable Digital Infrastructure Alliance (SDIA), she has been researching how demand-side flexibility in the ICT sector might be instrumentalised in pursuit of greater European energy efficiency and independence in the digital age.

Mr Bartolomé CARVAJAL holds a double bachelor's degree in Law and Political Science and a Master's degree in International Relations. He graduated from the College of Europe in 2019, within the European Political Governance Studies programme, where he participated in the first edition of the TellUs Environmental Policy Lab project, in collaboration with the European Commission. Since then, he has focused his work on sustainability and emissions reduction technologies. Firstly, interning at the Spanish Embassy to the United States, the EU Affairs office of Siemens, or the European Commission (DG MOVE). He then worked as Project Coordinator for Renewable Hydrogen at SolarPower Europe. He is currently working as a parliamentary assistant at the Spanish parliament, assigned to the committees for the Ecological Transition and for Industry (Spanish equivalents to ITRE and ENVI Committees at the European Parliament).

Mr Rene SCHROEDER, German nationality, works as Executive Director for EUROBAT, the automotive and industrial battery manufacturers association. He previously worked at various European associations, including the European federation of the waste industry. He also held internships at the European Parliament and the Delegation of the European Commission in Washington, DC. Mr SHROEDER has a Postgraduate Master in European studies from the College of Europe in Natolin and a Master in Political Science from the University of Rostock, Germany.

Ms Mariam AVAKOVA holds a Master of Science in Natural Resources with interests in social entrepreneurship, natural science, technology, digital media, sustainability, networking, and other areas. Mariam is a Black Sea Young Ambassador and a Young Ocean Advocate in the # Youth4Ocean Forum. She was a UN COP26 Glasgow Delegate and COY16 Country Coordinator for Georgia, as well as a Community Assembly organizer within a Global Assembly to give community members a chance to make an impact in learning, discussing, and addressing the climate and environmental crises. She is a member of the Digital Communication Network, Erasmus + programs, Think Young, WomeninTech network, Diamond Challenge, SI SAYP, Black Sea Connect, Black Sea Forum, and other organizations and projects.

Mr Bastien GIRARD is Policy Assistant for the Space Policy Unit in the European Commission – Directorate-General for Defense Industry and Space (DEFIS). He contributes to the policy development and implementation of the EU Space Programme. Before joining the Commission in March 2021 as a BlueBook trainee, he was a trainee at Euroconsult, responsible for the analysis of space policies and programmes, in Europe and beyond. Previously, he held various intern positions in the Department for Space Policy and Defense in the French Ministry of Research and Innovation (2019) and the Service for European Affairs in the French Parliament (2018). He also volunteered for “International Independent Institute for Space and Satellite Solutions” (3i3s) and for “Association Nationale Recherche et Technologie” in France. He drafted two Master thesis, on the making of the EU policy of access to space, and about the mobilisation of French members of parliament in space policy. He holds a Master Degree in Political Science from Paris 1 Panthéon – Sorbonne and a Master of Arts in European Interdisciplinary Studies from the College of Europe in Natolin.

Ms Daniela MEZZADRI graduated in International and Diplomatic Relations at Instituto Universitario L’Orientale of Naples where she specialized in European affairs. Holding different research scholarships at the Humboldt Universitaet and Frei Universitaet of Berlin, Ms MEZZADRI conducted research into the Political Construction of Europe in the view of the German Philosopher Juergen Habermas who she interviewed. Prior to her Master’s degree in European Interdisciplinary Studies from the College of Europe in Natolin, Ms MEZZADRI was a financial broker dealing with German and East European financial Institutions in the Eurobonds institutional market. She was selected by the Italian Ministry of Social Solidarity for promoting an international cooperation project in Brussels at the European Institutions. She worked as Institutional Communication associate for Synergie en Europe, an IBM partner endowed with new technologies products. Now she works for the United Nations in the ICT sector as client service officer and UN-SWAP focal point (United Nations program for gender equality and empowerment of woman in the Agenda 2030).

Ms Lisa LACROIX holds a Master’s degrees in European Interdisciplinary Studies from the College of Europe in Natolin and Sciences Po Grenoble after having obtained a Bachelor and a Master’s degree in public law. She has been working since august 2021 as Junior Research Fellow with a focus on space traffic management and geospatial data at KU Leuven University (Belgium). Before that, she worked as Deputy Science Attachée for Research and Digital Affairs at the French Embassy in Germany (2019-2021) and as Space Affairs Officer at the French National Centre for Scientific Research (CNRS) - National Institute for Earth Sciences and Astronomy (2018-2019). During two years (2018-2020), she served as Regional Executive Secretary Europe of the Space Generation Advisory Council (SGAC), the organization representing students and young professionals of the space sector to space agencies and international organizations.