ENP Round table: "The Global Strategy and the 2015 ENP – Enhancing the Resilience of the EU's Eastern Neighbours: The Challenge of Protracted Conflicts"

This round table aimed to discuss the EU's involvement in regional conflicts in the EU’s Eastern neighbourhood, including the long-simmering Transnistrian conflict in Moldova, the conflicts between Georgia and its breakaway regions Abkhazia and South Ossetia and the Nagorno-Karabakh conflict between Armenia and Azerbaijan, as well as the more recent conflict in Ukraine. In addition to addressing current and recent dynamics on the ground, the round table explored what the EU and its Member States (could) contribute in light of the recently adopted Global Strategy and the revised ENP.

About the speakers:
Dr Nona MIKHELIDZE, Senior Fellow at the Istituto Affari Internazionali (IAI) in Rome, holds a PhD in Political Science from Scuola Normale Superiore (Pisa), and a M.A. in Regionalism: Central Asia and Caucasian Studies from the Humboldt University Berlin (HU), where she was awarded with the Volkswagen Foundation Scholarship as a Research Fellow. She holds also B.A. and M.A. degrees in International Relations from the Tbilisi State University. Her research interests include the ENP and conflict resolution in the South Caucasus, the Wider Black Sea and regional cooperation, Turkey and Caspian Region, and Russian foreign policy in the ex-Soviet space.

Dr Derek AVERRE is Reader in Russian Foreign and Security Policy and former Director of the Centre for Russian, European and Eurasian Studies, Department of Politics and International Studies, University of Birmingham. His main research interests focus on Russian foreign and security policy, Russia-Europe relations and arms control/non-proliferation issues. He has co-edited a book and journal special issues and written numerous journal articles and book chapters, as well as organizing a series of policy and academic conferences and presenting widely in the US and Europe on these topics. He is currently leading a work package on a European Commission-funded FP7 project (CASCADE) and coordinating for Birmingham a Marie Curie Research Exchange Scheme (EuinDepth). He is a member of the Editorial Board of the journal European Security.

Dr Neil MELVIN is Director of Studies at the Stockholm International Peace Research Institute (SIPRI). At SIPRI, Dr MELVIN is also responsible for work on Russia and the Euro-Asia region, with a particular focus on security and conflict issues in the Caucasus and the Black Sea region. Prior to joining SIPRI, he held senior positions in several international organisations focused on European security (the OSCE and the Energy Charter). He has worked at leading think tanks across Europe and has held teaching positions at the London School of Economics, Leeds University and the Brussels School of International Studies. He holds a D.Phil from St. Antony’s College, Oxford University.

Professor Florent PARMENTIER is a lecturer at the School of Public Affairs in Sciences Po and a research associate at the Center of Geopolitics of HEC Paris. He has extensively worked on state-making and the rule of law in the European Neighbourhood Policy, energy policy and security issues. His latest book is Les chemins de l’Etat de droit. La voie étroite des pays entre Europe et Russie (Paris, Presses de Sciences Po, 2014). He is the co-founder of the blog eurasiaprospective.net. 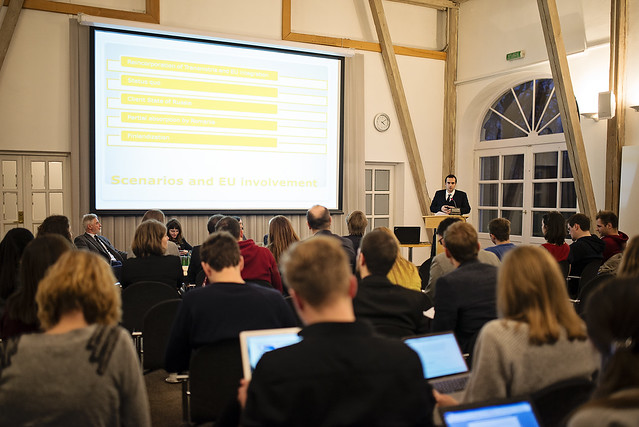