On 22-23 September 2016, the European Civilization Chair at the Natolin (Warsaw) campus of the College of Europe hosted the major international and interdisciplinary conference "The Fate of Freedom in Eastern Europe: Autocracy – Oligarchy – Anarchy?".

Speakers came from Belarus, Canada, Finland, Lithuania, Poland, Ukraine, the UK and the USA. Over 100 people – students and guests from Warsaw and beyond – were present as historians of various eras, political scientists, philosophers, politicians and diplomats discussed the potential for stable government founded on liberty in the region from Poland to Russia, from the Middle Ages to the present.

​Following a welcome from the Vice-Rector of the Natolin Campus, Mrs Ewa OŚNIECKA-TAMECKA, and an introduction from the Chairholder, Professor Richard BUTTERWICK-PAWLIKOWSKI, the keynote lecture was delivered by Professor Robert FROST of the University of Aberdeen on "Liberty and Self-Government. The Polish-Lithuanian Union and the Embodiment of the Renaissance Commonwealth". Six panels considered the problem of freedom in the region in relation to the themes of oligarchy, citizenship, diversity, anarchy and sovereignty, autocracy, and democracy, before the summing up at a round-table session chaired by Professor Andrzej NOWAK, one of the College's visiting professors. Several of the participants are also involved in the Three Ukrainian Revolutions (3R) project carried out in the European Civilization Chair.

Much discussion focused on the relative roles of exterior and internal factors in the blossoming and fall of the Polish-Lithuanian Commonwealth; opinions were divided over the potential of its legacy and memory to bring together the Belarusian, Lithuanian, Polish and Ukrainian nations in the twenty-first century. Considerable attention was devoted to the present condition of liberty in Belarus and Ukraine, while the potential for democracy at various times in Russian history was also explored. One of the principal themes that emerged from the discussions was the inadequacy of liberalism when deprived of an underlying sense of the common good (res publica) pursued by a political community of citizens with shared cultural reference-points. This was linked by some speakers to the need to pursue republican visions of liberty that include both positive and negative understandings of freedom. Some participants emphasized the need for independence as the sine qua non of liberty; others explored how freedom could be cultivated in various kinds of voluntary union between political communities. 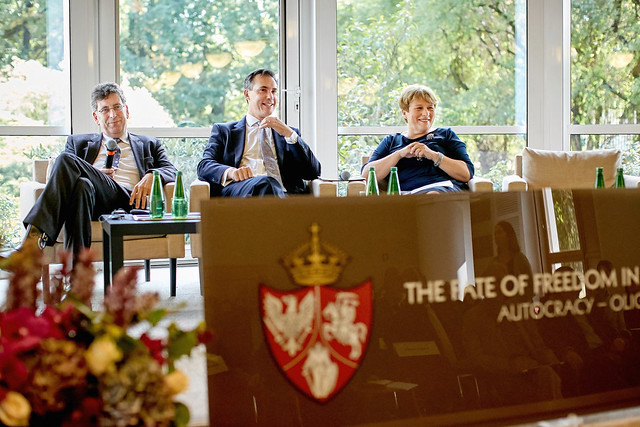