Football season at the College of Europe in Natolin

The College of Europe in Natolin began its football season in January 2022 by joining the Sportliga Weekend tournament in Ursynow. The seven-a-side game played once a week over nine consecutive weeks saw the students contest matches against local opposition at the Estadio Na Uboczu, close to Natolin. The players have been regularly cheered on at the matches by other members of the student community. Although off to a slow start, the team currently sits in the middle of the table in Sportliga, with a record of 3 wins, 4 losses, and 1 draw (with one game to go), as of 29th March.

The team has been kitted out with a series of jerseys courtesy of kokott.pl, adorned with the typeface of the Eliane Vogel-Polsky promotion and in the red/white colors of the College.

In March, the team began playing a new tournament against other international teams based in Warsaw. The Etnoliga tournament (6-a-side) will see the team play a series of 11 matches at the Orlik pitch, close to the campus. Natolin got off to a strong start, with 1 victory and 1 draw from the first pair of games. Etnoliga is an inclusive tournament, with two girls taking the field (from the six total) at all times.

Below is a selection of photos of the event through our Flickr gallery below (photos courtesy of our student Sara EPIFANIO). 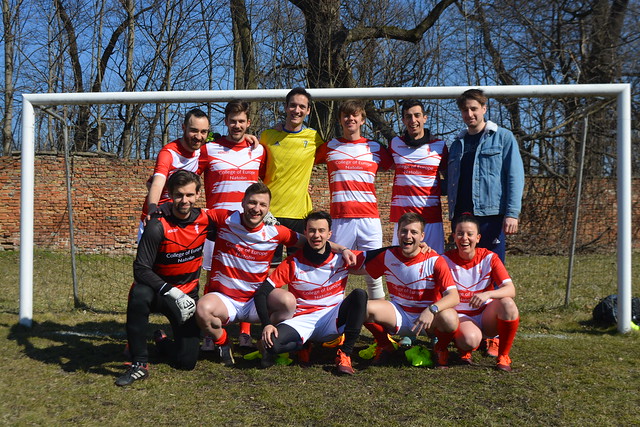