From 4 to 15 July 2016, the Natolin (Warsaw) campus of the College of Europe hosted the fourth edition of the annual Warsaw Euro-Atlantic Summer Academy (WEASA). 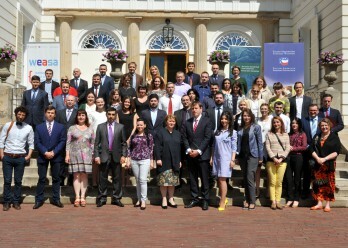 WEASA is co-organized by the College of Europe Natolin campus, the German Marshall Fund of the United States and the Polish-American Freedom Foundation. The Academy aims at promoting the political, social and economic foundations of modern democracies in the European Union and the transatlantic community, as well as the values of democracy, freedom, pluralism and peace. The College of Europe Natolin campus hosts the event and oversees its academic programme. Academy participants include up-and-coming policy analysts, experts, advisers, civil servants, NGO representatives, and journalists from Eastern Partnership countries. They are chosen based on a strict selection of applications received; this year, 45 persons were selected from among nearly 320 applicants.

WEASA 2016 was devoted to the new architecture for transatlantic support to the Eastern Partnership, and notably to issues of regional policy and regional development. The programme was designed to include lectures with discussions, skills-building workshops, a field visit to the city of Lublin and its economic cluster and special economic zone, and activities where participants themselves played the leading role. Thematic blocks in the programme included the ENP Review; the ENP and the Common Foreign and Security Policy; security policy and transatlantic relations; strategic planning and crisis management; regional policy and development, including local clusters development and the role of regional elites; cross-border cooperation, and central-local relations.