On Friday, 1 April 2022, the Polish National Day took place at the College of Europe in Natolin. The Natolin Campus was transformed into a landscape of a Polish fairy tale with snow surrounding the buildings' premises.

The National Day revolved around the concept of solidarity. The Polish students proposed a transversal version of the country, showing all shapes of Polish identity and Polish solidarity from different moments of the State’s history.

The night before the National Day, the students had the chance to watch an interesting movie – "Jack Strong" – particularly relevant because of the courage of a man, Colonel Ryszard KUKLIŃSKI, who prevented a potential nuclear confrontation during the Cold War.

Throughout the entire day and during the weekend, the students on campus could enjoy several art exhibitions. At first, the Polish students proposed a series of portraits of relevant figures that somehow contributed to the said solidarity – among them Irena SENDLEROWA and Martyna WOJCIECHOWSKA. Later, students could watch a series of old-time pictures of Warsaw, granted by the Museum of Warsaw and representing the city from the end-XIX century to the beginning of the XX century. Additionally, there was an exhibition of Polish posters from the modernist era. Lastly, students could be taken on a fascinating temporal trip thanks to an exhibition of items and objects from the Polish People’s Republic (PPR) era, provided by the Museum of Life in the PPR.

The PPR exhibition was the ground for the very first attraction of the national day. Polish students introduced their colleagues to the daily life and culture in the communist times in Poland through a workshop, illustrating the specific 'newspeak' and the scenes from the movie Miś.

After that, students could enjoy a wonderful dinner based on Polish cuisine from the XVII century in the campus restaurant, magnificently decorated to allow students to have a full immersion experience. There was also a possibility to see outfits of that time, with some of the Polish students dressed in aristocratic clothes and in the regional ones.

The main event of the Polish National Day was the High-Level Panel about solidarity nowadays and as a national trait in Poland, with the participation of two exceptional guests: the Mayor of Warsaw Capital City, Mr Rafał TRZASKOWSKI and the former EU Ambassador to Ukraine, H.E. Jan TOMBIŃSKI. The guests were hosted and introduced by Madame Vice-Rector, Mrs Ewa OŚNIECKA-TAMECKA.

Lastly, Natolin students enjoyed a concert of Polish jazz performed by the internationally prized group Jazz Combo Volta. The performance was accompanied by a degustation of best selected Polish liquors, particularly a rare type of mead.

During the National Day, the Polish students at Natolin aimed at presenting all shapes of "Polishness" and Polish national identity to the community. We invite you to watch a selection of pictures of the event through our Flickr gallery below: 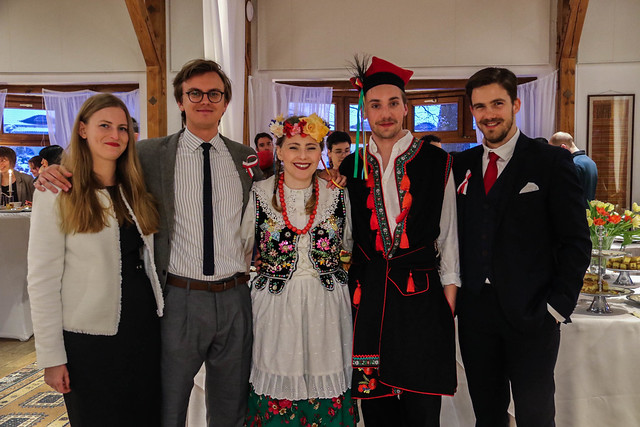