On 7-8 April 2015, the Natolin (Warsaw) campus of the College of Europe hosted a major international conference organized by the EP Geremek European Civilization Chair to mark the centenary of the First World War.

Besides the College’s own students and staff, it was attended by representatives of Polish academic institutions and museums, and by members of the general public. The conference began with introductory addresses by the Chairholder, Professor Richard BUTTERWICK-PAWLIKOWSKI, and the Rector, Professor Jörg MONAR, who emphasized Europe’s "fall from grace". The keynote lecture was delivered by Professor Sir Hew STRACHAN of the University of St Andrews on "The Ideas of 1914". He explained how and why a war, which was expected by most politicians, diplomats and generals to follow the relatively brief and containable precedents of the post-Napoleonic century, swiftly became an all-out struggle, fought by nations and empires in the name of great causes. 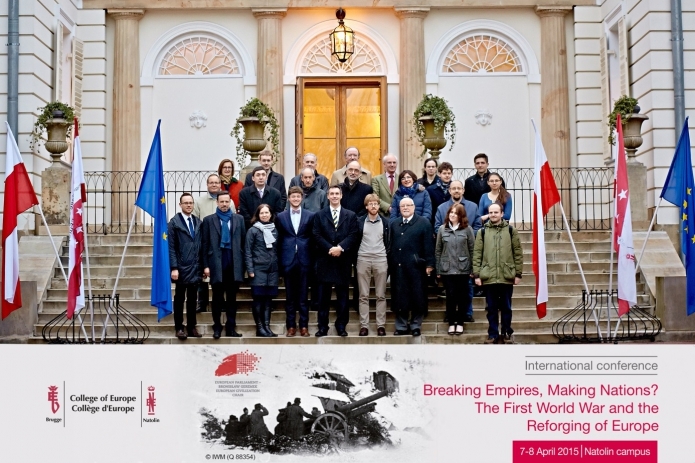 Thirteen other speakers, from Canada, France, Germany, Ireland, the Netherlands, Poland, Serbia, the UK and the USA also addressed the conference. Their papers considered relationships between global and continental empires, empires and nations, nations and urban communities, as well as the "Great War" of 1914-18 and the "greater war" of 1912-23. Panels were arranged by theme, rather than geographically, enabling the comparison of nation-building, violence, occupation, aftermaths, legacies, commemoration and memory in various parts of Eastern, Central and Western Europe. The impacts studied included those on women and men, and on combatants and civilians. Some of Europe’s empires collapsed under the immense strains of war, breaking into national pieces; others proved more resilient, but became more "national" in the process of reforging.

Three student workshops, led by the Natolin historians Professor Georges MINK, Dr Alex DOWDALL and Mr Quincy CLOET, addressed the Polish question, refugees, and the consequences for the idea of European integration. At the end, participants reflected on whether war in Europe could be imagined today.