On Friday, 12 March 2021, the students from the Benelux countries organized the Benelux Day at the College of Europe in Natolin. This event began with an official opening around noon. The Natolin Choir performed the Dutch song "Aan de Amsterdamse Grachten" written by Peter SHOTT (pseudonym for Pieter GOEMANS). The altos and sopranos sang their part with a Dutch accent and the baritones with a Belgian accent to show the unity of the Benelux countries.

Afterwards, the canteen prepared a delicious meal with Dutch specialties. Luxembourgish wine was kindly offered by the Embassy of Luxembourg and complemented the meal. While the students were eating, our student Nicolas VANDE KERCKHOVE presented a Kahoot Quiz about the Benelux countries. The winners received different prizes to celebrate their victory (Dutch waffles, Luxembourgish wine and Belgian chocolate).

Later, the canteen staff prepared typical Belgian culinary specialties for dinner. This time, the Belgian Embassy sponsored the drinks with Belgian beers of all types. However, that's not all: the Embassy also brought in a food truck offering fresh Belgian fries and different sauces in a cone!

At the beginning of the evening, we had the great honor to welcome three prominent Benelux representatives to our campus while strictly adhering to the applicable health security measures:

The distinguished guests were welcomed by our Vice-Rector Mrs Ewa OŚNIECKA-TAMECKA after which they gave a lecture on the Benelux Union, over which Belgium now exerts the presidency. Their presence really made this event memorable! After the lecture, a Q&A session followed moderated by our students Wicke VAN DEN BROEK, Tess HARTMANN HERGOTT and Gaspard VAN GOETHEM.

We would like to thank all the students who organized event: Wicke VAN DEN BROEK, Nicolas VANDE KERCKHOVE, Elise DEHU, Tess HARTMANN HERGOTT, Ugo MARECHAL, Andreas PAIKERT and Gaspard VAN GOETHEM. We would also like to give special thanks to the Benelux Embassies and to our distinguished guests who supported us in the organization of the Benelux Day! 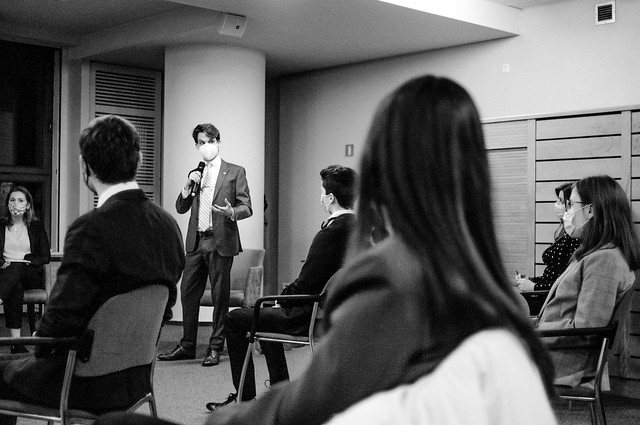