During the weekend of 7-9 May 2021, our students organized a "Central European Weekend" at the College of Europe in Natolin. Around 230 years after the adoption of Europe’s first modern written constitution by the Great Sejm of the Polish-Lithuanian Commonwealth on 3 May 1791, the students from Austria, Hungary, Lithuania and Poland celebrated their respective cultures.

On the first day, the Natolin community had the opportunity to taste the regions' cuisine at breakfast. The Austro-Hungarian lunch and the Lithuanian-Polish dinner were accompanied by two Kahoot! quizzes organized by Ms Marie MARTINEZ and Ms Apolka KOVÁCS-OSVÁTH for the Austrian and Hungarian part as well as by Ms Virginija BALČIŪNAITĖ, Aleksandra SMOCZYŃSKA and Mr Martin WYCISK for the Lithuanian and Polish sides respectively. The activity gave the students a chance to prove their knowledge of Central Europe and win various prizes, such as Hungarian and Austrian wine as well as a Lithuanian mug depicting historical figures, and traditional Lithuanian mead.

The programme continued at 19:30 with the opening of a Lithuanian-Polish art exhibition. After short opening remarks, by Ms Virginija BALČIŪNAITĖ and Mr Martin WYCISK, the Natolin students explored the works of a unique Lithuanian artist and composer: M.K. ČIURLONIS. The Polish part of the exhibition took the participants to Poland's 16 UNESCO World Heritage sites. The event was accompanied by a degustation of Polish wine and Lithuanian cheese džiugas. Later, Ms Marie MARTINEZ shared with the Natolin students the Viennese waltz culture and Austrian classical music of famous composers such as Johann Strauss and Wolfgang Amadeus Mozart. The second day started at 16:30 with the screening of the Oscar-winning Hungarian short film Mindenki hosted by Ms Apolka KOVÁCS-OSVÁTH. At 19:30 the Natolin students were invited to listen to the regional diplomats' speeches and video messages. Ambassador Thomas MAYR-HARTING, former Political Director of the Austrian Ministry of Foreign Affairs, former Head of the EU Delegation to the United Nations and Visiting Professor at the College of Europe in Natolin, started by giving the students an overview of the evolving history and role of Austria within the EU. H.E. Ms Orsolya Zsuzsanna KOVÁCS, Hungarian Ambassador to Poland, spoke in her video message about the importance of Central Europe to the EU. The Lithuanian Ambassador H.E. Mr Eduardas BORISOVAS sent a recorded message about Lithuania's historical developments, geopolitical influences and regional strength. Finally, Mr Szymon SZYNKOWSKI VEL SĘK, Secretary of State for Europe, Polish Community Abroad, Public and Cultural Diplomacy at the Ministry of Foreign Affairs of Poland, focused on the role of Central Europe in the Polish foreign policy.

The Central European Weekend was concluded on Sunday by a performance of the remarkable Natolin Choir. They performed the Ode to Joy on Europe Day, as well as the popular Austrian song by Mozart Komm Lieber Mai, the Hungarian song Tavaszi szél, and the Polish song Sen o Warszawie. Congratulations to all the students who contributed to the organization of theses successful days from the Austrian, Hungarian, Lithuanian and Polish Delegations: Ms Marie MARTINEZ, Ms Apolka KOVÁCS-OSVÁTH, Ms Virginija BALČIŪNAITĖ, Ms Joanna RYŁKO, Mr Martin WYCISK, Mr Jan CIESIELSKI, Ms Aleksandra SMOCZYŃSKA and Mr Michał WINIARSKI. We would like to express our gratitude for the support provided by the Embassies of Austria, Hungary, Lithuania, the Polish Ministry of Foreign Affairs, the Natolin choir and Žemaitijos Pienas.

Please find below a gallery of photos of the event: 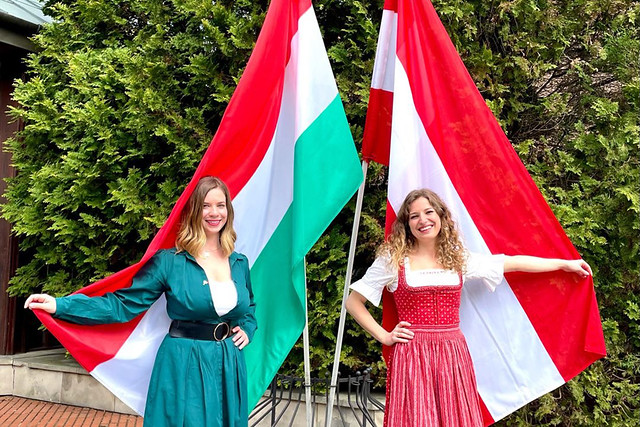