Simulation of the Minsk III Agreements

On 9 and 10 November 2019, the Natolin Simulation Nexus Society held a two-day high-level event at the College of Europe in Natolin. The topic of the event was the Minsk negotiations and the distinguished guest was Pavlo KLIMKIN, former Minister of Foreign Affairs of Ukraine (2014-2019) who was directly involved in the Minsk negotiations. On Saturday 9 November, Minister KLIMKIN gave a 2-hour lecture to the students about the Minsk process, the Normandy Format and the Donbass conflict. As an experienced negotiator, he shared his expertise on the conflict and kindly accepted to supervise and train students negotiating on that issue. On that day, Minister KLIMKIN also questioned participants of the simulation on their negotiation strategies and techniques, their ‘red line’, and their interests and goals in the simulation. This interactive part was very enriching for the participants who had the opportunity to ask the Minister any kind of question they had.

On Sunday 10 November, a 3-hour simulation on a hypothetical Minsk III Agreement was organized. The day started with a lunch between participants and the Minister, and right after, the 3-hour simulation started. Eighteen students took part in this event, representing about 9 different actors in the conflict. The exercise coupled both formal and informal negotiations which provided students with a very realistic view of what the Minsk negotiations should look like. After a long day full of twists and turns, the participants finally managed to establish a compromise settlement on the Donbass conflict. During the whole day, Minister KLIMKIN was present and listened to the students negotiating and putting his recommendations into practice. The simulation finally ended with a wrap-up session, during which our high-level guest reflected on the exercise and gave personal feedback to all the students.

The Natolin Simulation Nexus Society believes that this two-day event was a good way for students to crystallize their study trip experience, to put their knowledge regarding this complex issue into practice and to provide them with a unique opportunity to learn as much as possible from the expertise of our distinguished guest. Therefore, the Nexus Society would like to thank Minister KLIMKIN for accepting to supervise students during this exercise, the students for their energy and involvement during that weekend and finally the College, for helping us to coordinate and set up this simulation. The Natolin Simulation Nexus Society is looking forward to organizing new events during this academic year! 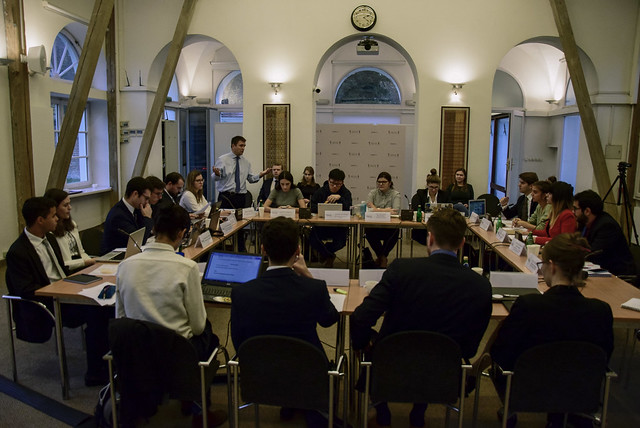