During November 2021, the Languages and Intercultural Dialogue Office at Natolin organised a series of linguocultural workshops to showcase the inextricable relationship between culture and language. Please find a selection of photos from our Flickr gallery and a description of the workshops below: 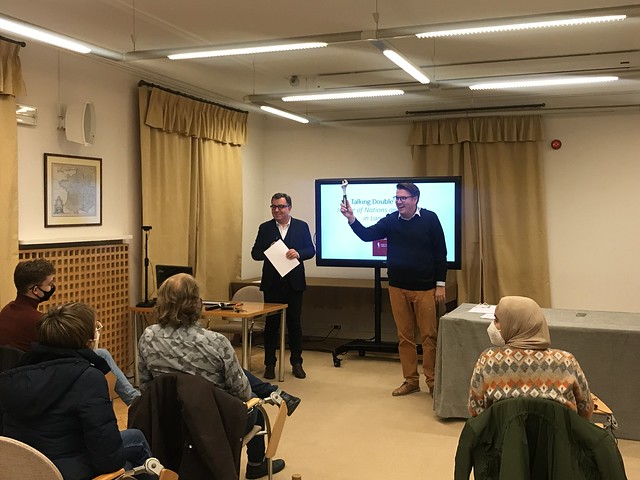 This workshop aimed to develop the participant's cultural competence, deepen their knowledge of Poland and Central Europe, familiarise them with selected cultural and lexical issues, facilitate the adaptation process in Poland, and bring Poland's cultural richness closer. The workshop was held by Ms Wioletta GURDAK, Polish language teacher at the Language and Intercultural Dialogue Office.

Ms Wioletta GURDAK graduated from the Polish Philology Department, University of Warsaw. A Polish language teacher for almost 20 years, teaching Polish in a multilingual and multicultural environment. She combines knowledge and practice with broad intercultural experience. Ms GURDAK has authored curricula and materials for teaching Polish as a foreign language for all levels (pre-A1 to C2) and co-authored two coursebooks with Dr Wojciech SOSNOWSKI, the Polskie czytanki series.

Modern Standard Arabic is the official language of Arab countries. It is used for official purposes, media, public administration and education purposes. Simultaneously, local Arabic dialects are used for everyday communication and entertainment. Arab people use their dialects which originate from Standard Arabic and are different in various Arabic states. This workshop focused on Algier's dialect, which is the spoken Arabic of Algiers and its peripheries.

Ms Lilla BACHA is the Arabic language professor at the Language and Intercultural Dialogue Office. She is a graduate of the Arabic and Islamic Studies Department at the University of Warsaw. She also studied at the University of Paris VIII and Inalco. She has more than 10 years of experience as a teacher of Arabic. Her interests include dialectology and the sociolinguistic situation in Maghreb, especially in Algeria.

Talking Double Dutch: Image of Nations and Cultures in Language (02/11)

During this workshop, the students had the opportunity to understand how culture and stereotypes are reflected in selected phraseological units from various European languages. The discussion also revolved around mechanisms and linguistic strategies at the foundation of the linguistic picture of the world.

Dr Maciej JASKOT and Dr Wojciech SOSNOWSKI are linguists and authors of numerous scientific publications, including articles, foreign language textbooks and dictionaries. They conduct workshops and lectures for foreign language teachers in Poland and abroad and implement European educational projects.

French is a language adopted by many other countries aside from France. This workshop aimed to deepen the students' knowledge of French-speaking countries such as Belgium by analysing cultural and political aspects of the country.

Prof. Pascal PEETERS is a professor at the University of Warsaw.

The Latin-American civilisation is close to the so-called "western" civilisation. However, there are specific essential differences between the two. The objective of this workshop was to list these differences and briefly present each of them. The discussions revolved around Latinos identity and why the latter do not want to belong to the western civilisation. Another relevant topic was the mixture of Indian and Africans and their relations with Spain and Portugal.

This workshop was delivered by Prof. Jacek PERLIN, a linguist and a diplomat, a lecturer at the Institute of Iberian and Ibero-American Studies at the University of Warsaw, former Ambassador of the Republic of Poland to Colombia and Venezuela and Consul General in Curitiba. Professor PERLIN has authored numerous publications in the field of linguistics and political science, in phonology as well as syntax and grammar. He has also authored Spanish and Portuguese dictionaries.

The main aim of this workshop was to show how knowledge of many languages has a propaedeutical value while learning any other additional language. As an artificial language system, Esperanto is an excellent instrument to understand natural languages' systematic solutions and improve the metalinguistic reflection and language awareness of our students.