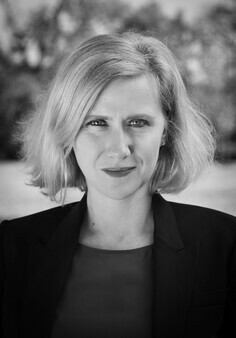 "Meet the Authors": Professor Emily GREBLE and her new book "Muslims and the Making of Modern Europe"

On Friday, 14 January 2021, the European Civilisation Chair  of the College of Europe in Natolin and the Natolin Library had the honour to host Professor Emily GREBLE (Vanderbilt University) within the framework of the Meet the Authors series.

Emily GREBLE is a historian of the Balkans and Eastern Europe. Her research interests include Islam in Europe, the transition from empire to nation-state, civil conflict, and local responses to socialism. Greble’s first book, Sarajevo, 1941-1945: Muslims, Christians, and Jews in Hitler's Europe (Cornell, 2011) examines the persistence of institutions and networks in the city of Sarajevo under Nazi occupation during the Second World War. Her second book, Muslims and the Making of Modern Europe (Oxford, 2021) upends the polemical doxa that Muslims were outsiders or foreigners to Europe, arguing that they are central to understanding the intricate processes of European nation-building and the nature of European equality, secularism, and law in the nineteenth and twentieth centuries. Tracing the stories of several generations of local, or indigenous, Muslim men, women, and children living in southeastern Europe from the 1880s to the 1940s, Greble uncovers Muslims’ negotiations with state authorities—over the boundaries of Islamic law, the nature of religious freedom, the meaning of minority rights—and demonstrates how Muslims helped to shape emergent political, social, and legal projects in Europe. Throughout this study, Greble shows how Muslim histories are European histories.

The event was held online.