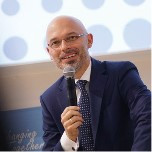 On 15 November 2019, he was appointed as the first Polish Minister of the newly established Ministry of Climate. On 6 October 2020 his portfolio was enlarged, so it became Ministry of Climate and Environment. During his tenure Polish government adopted, for the first time since 2009, a new 2040 Energy Policy, opening a new era of Polish energy transition. He designed the implementation and financing of the energy transition, particularly in launching programmes such as “My Water”, “Green Public Transport”, “Green Cars” and “The City of Tomorrow”. During his tenure Poland registered record increases in development of renewable sources, reaching 10 thousands megawatts of installed capacity in photovoltaics and 1 million prosumers. He launched successfully industrial alliances for hydrogen, photovoltaics, biogas and put a compete framework for he development of offshore wind. He is the author of the government programme for electromobility development in Poland, which was described for the first time as a concept in the book written in 2013–2015, together with Professor Leszek Jesień, New Electricity and New Cars. He was the originator of “The Electromobility Development Plan”, and thereafter he guided the creation of the Act on Electromobility and Alternative Fuels, thanks to which these forms of transport will be able to develop dynamically.

Michał Kurtyka is a graduate of the prestigious Parisian École Polytechnique and a scholarship holder in the field of quantum optics of the National Institute of Standards and Technologies, located near Washington, D.C., where he worked under the leadership of Nobel laureate in physics William D. Phillips. During the course of his studies, he also specialised in economics, with particular focus on industrial and market organisation, studying under Professor Jean Tirole, the 2014 Nobel laureate in economics. In the field of international economics, he studied at the University in Louvain-la-Neuve and he acquired his master’s degree at the SGH Warsaw School of Economics. He defended his doctoral dissertation at the University of Warsaw. He was a lecturer in the field of change management, economics, market organization and industrial strategy at the University of Warsaw, the Collegium Civitas and the Oxford Programme On Modern Poland. He is a co-author of the concept of implementation of effective changes in an enterprise, described in the book Change Management. From Strategy to Action, as well as the author of the book From Restructuring to Modernisation. Delayed Transformation of the Polish Power Sector in 1990–2009.

Starting 1 January 2016, Michał Kurtyka served as the Undersecretary of State in the Ministry of Energy, where he was responsible for the technological development and implementation of innovations in the energy sector, implementation of climate and energy policy in the fuel and gas sector, conducting international relations with countries and international organisations. He was also responsible for supervision of the state’s participation in the biggest Polish energy companies in the oil and gas industry, such as Orlen, Lotos and PGNiG.

On 27 April 2018, he was appointed as Government Plenipotentiary for the Presidency of COP24 – the United Nations Climate Summit in Poland. From July 2018, he held also the position of the Secretary of State in the Ministry of Environment. On 2 December 2018, he became the COP24 President, which ended with a great success enabling the effective implementation of the Paris Agreement. At the 24th UN climate summit, the international community agreed on the Katowice Rulebook, but also three important political declarations received major support – on the Solidarity and Just Transition, Electromobilty and Forest Protection.

Michał Kurtyka held successfully various roles in most influential international organizations. Under his Chairmanship of the Ministerial of the International Energy Agency in 2019 in Paris the Organization unanimously adopted, for first time in ten years, an IEA Ministerial Communiqué. He served as Chairman of the 42nd session of the Food and Agriculture Organization of the United Nations held in Rome in 2021 and as Co-chairman, together with US Secretary of the Department of Energy, of the Partnership of Transatlantic Energy and Climate Cooperation in Warsaw 2021.

Michał Kurtyka began his professional career in Polish public administration, in the Office of the Committee for European Integration, in the team responsible for conducting accession negotiations with the European Union – where he led the analytical team and was directly responsible for the field of energy and transport. Later, he oversaw the modernisation of many Polish companies by supporting them in adapting to the challenges of the European and global markets. He was a promoter of European cooperation in the area of industrial change and adjustment of the European industry to the challenges of globalisation at, among others, the European University of Labour and the Dublin Foundation. With his passion  for  science and technological progress he also helped establish a number of innovative start-ups leapfrogging from the current model to cleaner and more efficient energy system.