Ms Marija PEJČINOVIĆ BURIĆ, Secretary General of the Council of Europe and Natolin Alumna, interviewed by the “Faces of Democracy” initiative 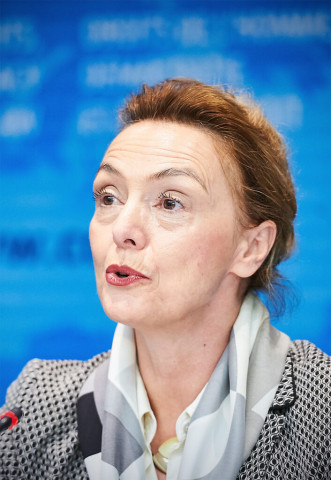 Ms Marija PEJČINOVIĆ BURIĆ, Secretary General of the Council of Europe and Natolin Alumna of the Stefan Zweig Promotion (1993-1994), is the 126th "Face of Democracy". The initiative "Faces of Democracy" was founded in February 2017 and takes a stand on the issue of protecting and strengthening democracy, pluralism, and freedom of the press.

Ms PEJČINOVIĆ BURIĆ has given an interview with Mr Sven LILIENSTRÖM, founder of the "Faces of Democracy" initiative, about democracy, the significant role of the Council of Europe as a peace project, and its future prospects.

"We see the challenges across our member states, but we also have the tools and the solutions to address them. We don’t need to renew the Council of Europe, but the commitment of our member states to it."

The full text of the interview is available here.

Among the long list of well-known personalities who are part of the initiative "Faces of Democracy" there are also several experts and leaders such as Ms Sviatlana TSIKHANOUSKAYA, Leader of Democratic Belarus, Mr Miroslav LAJČÁK, OSCE CIO 2019 and Minister of Foreign and European Affairs of the Slovak Republic, and Dr Piotr CYWIŃSKI, Director of the Auschwitz-Birkenau Memorial and Museum, who met with Natolin students and gave lectures to them on different occasions.