From 20 to 26 September 2020, Natolin students of the Mário Soares Promotion embarked upon their first semester study trips under the overarching theme "Borderlands: Peripheries have much to teach the center". This year, students had the possibility to choose between the following four study trips: 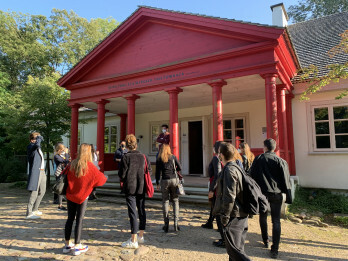 Borderlands are places in-between and on the peripheries that can confront the view from the center, and they provide a perfect jumping off point for understanding pluralism, cooperation and community building. Apart from being places on a map, borderlands are also a phenomenon in which various boundaries – either political, ethnic, cultural, linguistic, religious or geographic – overlap. The occurrence of borderlands in the world affects all matters of human life, extending beyond the cultural and political spheres, including economics and ecology. By gaining a deeper appreciation for borderlands – in their many forms – we can recognize their immense value for understanding the world we inhabit.

Borders inherently create divisions, regardless of whether they are lines on a map or imagined partitions between social groups. But only rarely are borders representative of a clear break from one category to the next. This fluid melding between sectors offers the opportunity to puncture and expose the premises that undergird worldviews formed at the center.

Physical borderlands exhibit two broad trends that will be fleshed out before and during the study trips. The first is a creative instinct, the ways in which the distinct characteristics of borderlands lead to the formation of communities. The second is a destructive instinct, i.e. how borderland communities can be manipulated to tear apart their collective tissue. As a result, throughout history these peripheral and transitional spaces have had periods of peaceful coexistence and conflict.

Imperfect political systems have had difficulty accounting for the peculiarities of borderlands. However, the liberal ideas upon which all democracies have been established, allow for difference to not become a point of tension, but rather a source of strength. Liberal values permit pluralism – a divergence of opinions and identities – without threatening the integrity of the body politic. In many ways, borderlands can present a challenge to the neat over-simplified narratives that dominate our current cultural and political sphere.

At base, borderlands epitomize the liminal characteristics of the human social experience. Revisiting borderlands, both physical and ideological, allowed us to work against oversimplification, dualism and essentialism across frontiers of time and space. The study trips used the east-central European space as a proving ground for testing our assumptions in ways that resonate beyond this part of the world. Each of the destinations invited lively debate over the meaning of basic concepts such as territory, ethnicity, language, environment, trade and sovereignty.

The aim of the study trip to Kraków, Łancut, Przemysł, Rzeszów and several other locations was to reflect on the contemporary dimension of the Galician myth and to critically assess and compare the divergent perceptions of Galicia as not merely a term once devised by the Habsburg Monarchy in 1772 to denote the lands it took from the partitioning of the Polish-Lithuanian Commonwealth among Russia, Prussia and Austria but mostly as a shared territory of memory for Poles, Ukrainians, Austrians and Jews now separated by borders.

Historical Galicia disappeared from political maps in 1918 – yet it is present as a mythical place going beyond national frontiers. This is a peculiar borderland both uniting and divisional. Joint existence may lead to the opposite results: it can result in conflicts, antagonism and fragmented societies; the same as it can account for harmonious co-existence and even create a new category of belonging overreaching the ideas of nationalism by producing a sense of being a part of a pluralistic community with a unique culture based on multinationalism, tolerance and shared values and beliefs. In such a context, the concept of a joint existence within a borderland can be paradoxically defined by the variety of actions from cooperation and assimilation to opposition and confrontation.

The Galician myth does not always correspond to history – but carries different meanings. The redrawing of national borders, the interwar period and the transformation of Polish-Ukrainian relations into a spiral of discrimination and repression – for some, Galicia represents an image of daily political rivalry and conflicts; for others – an idyllic multinational coexistence. In this context, this study trip invited students to travel and explore the territory that had been a home to an intricate, multi-layered mosaic of peoples and religious communities, which were stratified legally and economically.

What is Galicia today? Galicia felix or Galicia miserabilis? Historians, sociologists, reporters and other experts guided students through the complex "Galician" space – historically demarcated not through the existence of political borders but through first and foremost cultural and religious. One hundred years on, these borderlands seem to continue to serve as a laboratory for what Prof. Timothy SNYDER has called "the reconstruction of nations" in contemporary Europe. 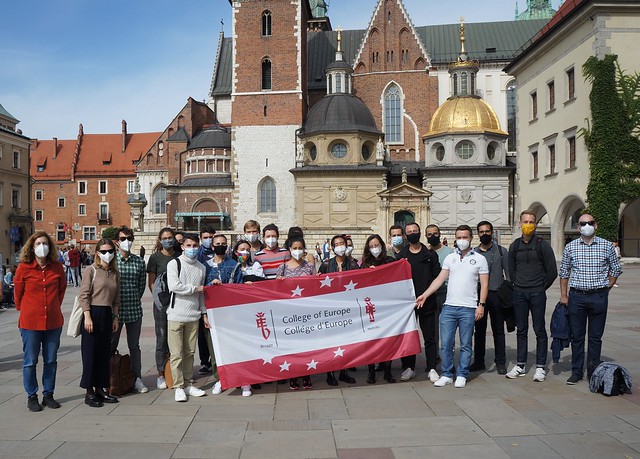 "Nysa: A new Borderland Between Germany, Czechia and Poland"

This region connects southwestern Poland, with the area around Liberec in the Czech Republic and eastern Saxony in Germany, located in the Sudetes mountain area. For centuries this area has been closely interconnected by common Germanic cultural and linguistic ties. Nysa became a borderland because of what happened after the Second World War as a result of ethnic cleansing and international agreements to deprive Germany some of its eastern territory.

These emptied lands in Czechoslovakia and Poland were repopulated with refugees and deportees from all over the world. In addition to the Poles and Czechs from eastern territories lost in postwar arrangements, there were Ukrainians, Lemkos, Roma, and repatriated migrants from France and Belgium. Even less well known are the groups of war refugees settled in these areas first from Yugoslavia, then Greece, Korea and finally Vietnam in the 1960s. In Czechoslovakia, Roma and Sinti people were deported from Slovakia and further east into the former Sudetenland. In essence, a multicultural amalgam replaced the rather uniform German past. Polish communist propaganda focused on a specious argument about ancient Polish ties to the region, calling them the "recovered territories". For Czechoslovakia there was no dispute over whether the territory belonged in the country, but its population changed dramatically. The past and present of this region brings up a number of fascinating questions about what to do with relics of the previous inhabitants, and how the new populations make this place their own. Finally eastern Saxony, abutting Czechia and Poland, faced its own borderland crisis of depopulation following the reunification of Germany in the 1990s.

As with the others, this study trip destination covered the history and memory of the region, but also focused on the present issues that borderlands face, such as cross-border cooperation, energy and ecological concerns, and the free movement of labour. 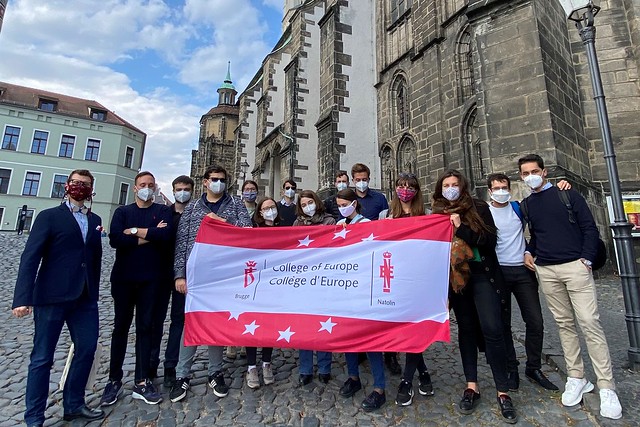 "The Many Silesias – Identities, Memories, Transitions"

The aim of this study trip was to familiarise the students with multiple identities and historical trajectories of the region of Silesia, as well as its transitions: from one realm/state to another, from totalitarianism to democracy, from an economy based on fossil fuels and industry to a climate-and-environment-neutral one.

It is a model example of borderlands. Divided into Lower Silesia, with Wrocław as its capital, and Upper Silesia around Katowice, Opole and Cieszyn, the region truly extends geographically, economically, mentally and culturally beyond contemporary Polish borders to Germany and Czechia. "Silesia" is not merely a piece of land, but the scene of shared complex fate and, arguably, a home to separate, independent identity.

These lands have been ruled by Polish dukes, Bohemian kings and the Habsburg and Prussian emperors. It is there that the borderlines of three empires met during the partitions of Poland from 1795 till 1918 (Prussia, Russia and the Habsburg Monarchy). Traces left by this division are still observable in economy, infrastructure, culture and mentality of the local population. The two World Wars have deeply affected the territory and population of Silesia: from territory competitions among the Allied powers and the (re-)emerging nation states, through the instrumentalization and repression towards national and ethnic minorities by Nazi Germany, the Soviet Union and post-war communist authorities, to the massive forced population transfers and deportations organised after the substantial shift of borders in 1945. Upper and Lower Silesia played an important role in overthrowing communism, facilitating democratic transition initiated by the "Solidarity" trade union and movement.

Nowadays, over 800,000 Polish citizens consider and declare themselves as "Silesians". The recognition of this strong identity is subject to heated debates with the Polish majority and is treated with little enthusiasm by the central authorities. The region is also at the heart of the current discussions on economic and energy transition. Coal mining and industrialisation were a crucial part of the "founding myth" of Silesia. Their role in local culture and society remains pivotal. The trip seeked to examine the economic and social challenges and costs of the green transition, and how these can be addressed, i.a. through innovative economy and revitalisation of postindustrial areas. 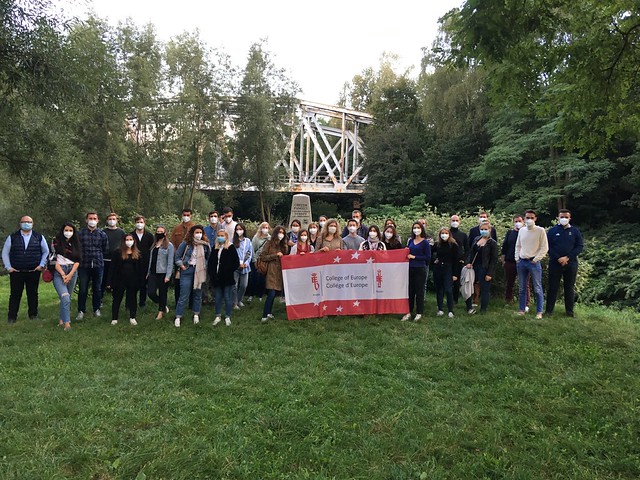 The regions of Suwałki (Suwalszczyzna) and Podlasie are examples of borderlands characterized by the effects of shifting borders and consolidating identities, which serve as a source of community.

After the partitions of the Polish-Lithuanian Commonwealth, the territories were annexed by the Russian Empire, whose suppressive policies towards the population fanned the sparks of nascent national movements craving independence. During World War I, this socio-cultural diversity of the two regions had been exploited for political purposes by German and Russian Empires. Discriminatory politics created rifts between local ethnic groups that had a profound, long-lasting impact on the optics of "us" and "them" between neighbours.

For centuries, the Suwałki/Suvalkai region has been cohabited by Jews, Lithuanians, Poles whilst the Podlasie territories have been home to Belarusians, Jews, Poles, and a community of Tatars who settled in the Grand Duchy of Lithuania and then the Polish-Lithuanian Commonwealth after the breakdown of the Golden Horde. The confessional differences of these groups were clearly perceptible (Orthodoxy, Judaism, Islam), but the tolerance endured. The trip explored the rich religious heritage in Białystok, Supraśl, Kruszyniany, and Tykocin, among other locations and provided an opportunity to listen to voices representing the aforementioned minorities.

Geopolitics is a determining factor for both regions. The accession of Poland and Lithuania to NATO and the EU has turned the borders with their neighbours into an external border of the EU. The 65-kilometer wide Suwałki corridor, squeezed between Russia and Belarus, is the only land connection linking the Baltic states with the rest of their NATO allies, which makes this borderland strategically important from a security perspective. The trip ultimately investigated the significance of the current, unprecedented protests following recent presidential elections in Belarus for the borderlands. We had a chance to meet journalists from Belarusian Radio "Racja" and their guests.

Lastly, Podlasie and Suwalszczyzna are both renowned for their picturesque landscapes, which had a profound influence on numerous artists, most notably the Nobel prize winner, poet Czesław MIŁOSZ. Likewise, the Polish-Belarusian painter, Leon TARASEWICZ, was acclaimed for his sensitivity to nature and the reproduction of the Podlasian environment in his oeuvres. Nature’s disdain for political borders creates transnational obligations for borderland communities. The trip aimed to familiarise the participants with the challenges of environmental protection and how they foster cooperation across the border. 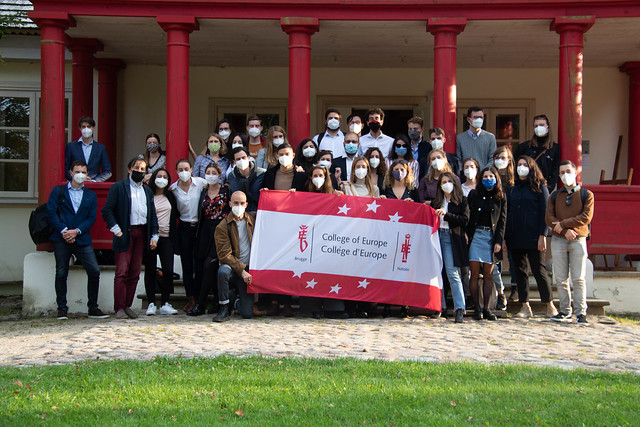