On Tuesday, 28 June 2022, at 10:30, the College of Europe in Natolin held the Graduation Ceremony of the Academic Year 2021/2022 of the Éliane Vogel-Polsky Promotion. The ceremony took place in the Natolin Oaks Garden.

The Natolin Choir opened the ceremony by singing the Ode to Joy, followed by the graduation address of the Rector, Mrs Federica MOGHERINI.

Our guest of honour was Ms Olha STEFANISHYNA, Deputy Prime Minister for European and Euro-Atlantic Integration of Ukraine, who addressed the Natolin students via video message on the current situation in Ukraine.

Had the honor to speak to the graduates of @coenatolin.
I was there last October. So much has happened since then, so much pain & suffering that changed us.
Urged students to be brave, think big, & remember the high cost of compromises. The future of Europe to be decided today

Please find a photo gallery of the event: 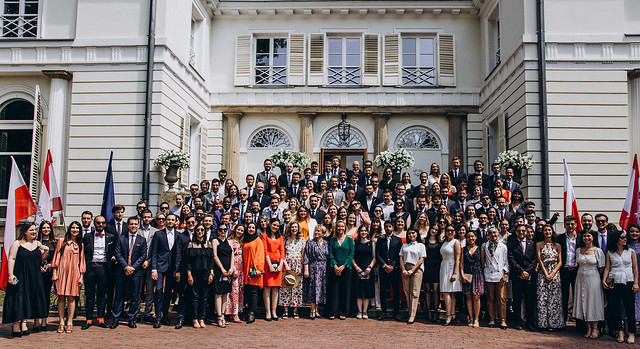 On the occasion of the ceremony, the following prizes were announced and awarded by Prof. Pascaline WINAND, Prof. Georges MINK and Prof. Tobias SCHUMACHER to the best students and the best Master's theses authors of the Éliane Vogel-Polsky Promotion 2021/2022 at Natolin:

After an intervention by the Student Representatives, the Vice-Rector, Mrs Ewa OŚNIECKA-TAMECKA, delivered the farewell address.

Finally, a family photo was taken in front of the Natolin Palace, and lunch was offered at the Palace Gardens.