Debate: "Between Russian Empires. One hundred years on"

On 15 March 2018, the European Civilization Chair hosted the debate: "Between Russian Empires. One hundred years on". The debate was dedicated to the centennial of the Russian revolution and the ending of WWI. The debate concentrated on the totalitarian legacy of the revolution and analyzed its consequences for Russian imperialism.

Among the debate participants were:

The debate was preceded by the screening of a documentary on the Russian revolution, entitled Lenin, another story of the Russian Revolution, by Professor Michel DOBRY, Professor Marc FERRO and Mr Cédric TOURBE. 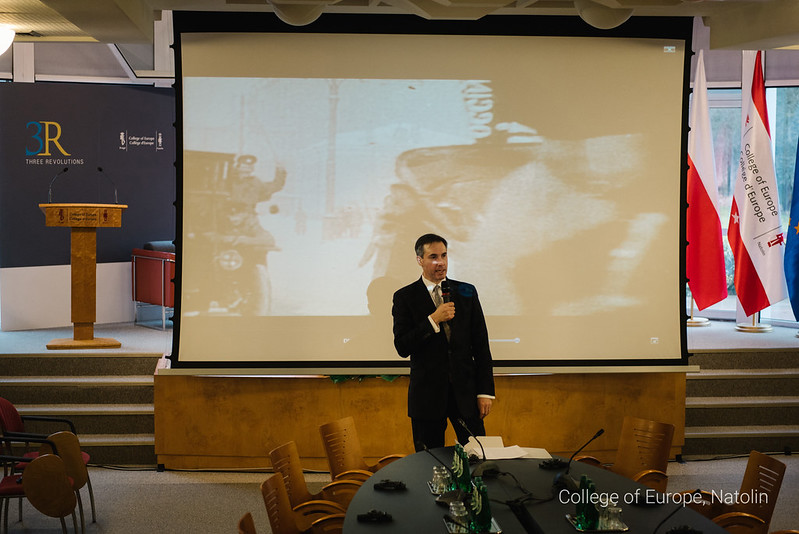 Biographies of the speakers:

Professor Michel DOBRY is Professor of Political Science at University of Paris 1 Pantheon-Sorbonne. He was the founder and director of Laboratoire d'analyse des systèmes politiques (CNRS). Prof. DOBRY is a member of the editorial board of Revue française de science politique. Since the 1980s, he has been working on the sociology of political crises. He is particularly interested in fascism and the National Front. In 2003, together with Bruno GOYET, Didier LESCHI, Gisele SAPIRO, Annie COLLOVALD, Robert O. PAXTON, Violaine ROUSSEL, Zeev STERNHELL and Brian JENKINS, he published an important volume on these issues entitled Le Mythe de l'allergie française au fascism.

Professor Serhii PLOKHII is a historian and an author specializing in the history of Ukraine, Eastern Europe and Cold War studies. Since 2007 he has been the Mykhailo Hrushevsky Professor of Ukrainian history at Harvard University, where he also serves as the Director of the Harvard Ukrainian Research Institute. Earlier, he worked at the Canadian Institute of Ukrainian Studies as well as the Ramsey Tompkins Professor of Russian history at the University of Alberta.

Dr Gayle LONERGAN is a graduate of Cambridge and Oxford Universities. She specializes in modern history. Since graduating, she has held several research fellowships in modern history at Oxford University, the National Research University as well as the Higher School of Economics in St Petersburg, Russia. Her area of expertise includes late 19th century/early 20th century history.

Dr Nikita PETROV is a Russian historian working for the Memorial society in Russia. He specializes in Soviet security services. On 24 March 2005, he was awarded the Knight’s Cross of the Order of Merit of the Republic of Poland for his efforts in uncovering the truth about repressions against the Polish people during the Second World War. In 2008 he earned a PhD from the University of Amsterdam. He publishes in Novaya Gazeta.

Dr Marcel VAN HERPEN is the Director of the Cicero Foundation. He is an expert specializing in Russia, Eastern Europe and post-Soviet states. He is the author of three books on Putin’s Russia, which were translated into different languages, and is a frequent media contributor to media outlets such as Forbes, the National Interest, Project Syndicate, the Moscow Times, Japan Times, and New Eastern Europe.