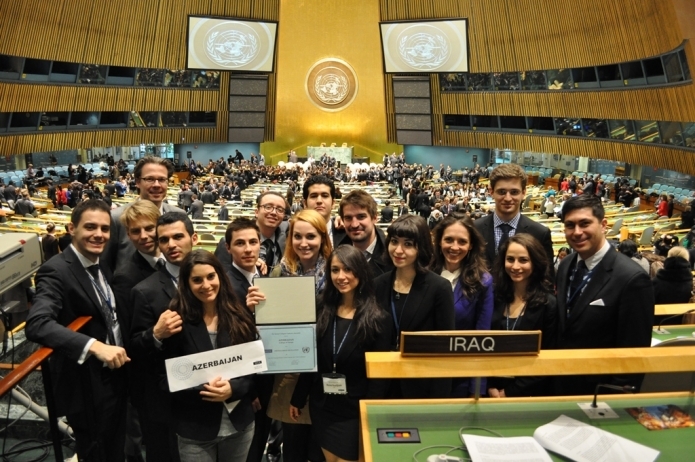 From 24 March to 28 March 2013, fourteen students of the Natolin campus of the College of Europe participated in the prestigious New York National Model United Nations (NMUN) 2013. In the context of its fourth consecutive participation in the world’s biggest and most important simulation of the works of the United Nations, the College of Europe represented the Republic of Azerbaijan. The students were accompanied by their coaches, Academic Assistants Mr Mattia FILIPPIN and Mr Paweł MICHALSKI, and supported and guided by Professor Tobias SCHUMACHER, Chairholder of the European Neighbourhood Policy Chair.

In New York, the delegates were divided into groups of two people and represented Azerbaijan in different working committees, i.e. the Security Council, General Assembly (First, Second, Third and Fourth Committee), United Nations Conference on Trade and Development and the International Atomic Energy Agency. In the working committees, taking place simultaneously in the Hilton Hotel and the Sheraton Hotel in Manhattan, the students acted like true diplomats, staying in character for the entire conference. The delegates worked hard, often more than 14 hours a day, mostly engaged in caucusing, preparing and delivering speeches, drafting working papers, negotiating common positions with other countries, and voting draft resolutions.

On the last day of the NMUN all delegates were invited to the closing ceremony in the General Assembly Hall at the United Nations Headquarters where all "NMUN Awards" were announced. By winning five "NMUN Awards", the College of Europe (Natolin campus) broke the record of previous years; the following awards were given to the delegation:

Given the large number of awards, the delegation of the College of Europe (Natolin campus) was one of the most awarded and praised delegations at the conference. We would like to congratulate the students for all their hard work during the training phase in Natolin and at the NMUN in New York.