Opening Ceremony at the Natolin campus of the College of Europe 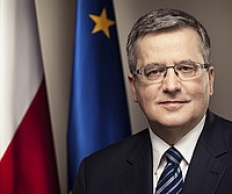 On Wednesday 16 October 2013 at the Natolin campus of the College of Europe, the President of the Republic of Poland, Mr Bronisław KOMOROWSKI, addressed the students on the occasion of the Opening Ceremony of the academic year 2013-2014.

His words of encouragement to the students to commit themselves to European integration and to the enlargement of the Union held a special significance at Natolin as the campus this academic year marks the 20 years since it was opened by Mr Jacques DELORS with the support of the Polish Government and the then President, Mr Lech WAŁĘSA.

Recalling how he had played near the Natolin estate as a child, President KOMOROWSKI said that he was delighted to be on the campus during such an important year and was pleased to affirm the College’s on-going mission of European unity. In his speech he warned that we are facing “an increasing aversion to the current shape of the EU and to deepening European integration.” He urged that we should decisively oppose political projects to weaken European integration arguing instead that more than ever “it is necessary to build enthusiasm for Europe.” Speaking directly to the students, he said that the Union is not a finished project and that every generation has the right and even obligation to make it fit with its own dreams and ideas. Nonetheless, he argued that “ceaselessly we must strive for the maintenance of the cohesion of the integration process” adding that Poland was decidedly against the development of the multi-speed Europe currently taking shape.

Addressing Europe’s most pressing problems and the problems faced by younger generations, President KOMOROWSKI urged that every effort should be made to maintain the European social economic model. He cited particularly the need to increase the competitiveness of the EU economy, to increase the security of the Union’s financial markets and to reform labour markets to make them more favourable to young people. He focused too on another founding idea of the Union, namely security. He urged his audience to see this hand in hand with economic development, pointing out that this was also key to the understanding of European integration shared by all countries of Central Europe and in the Eastern Partnership. Turning to the Eastern Partnership, which he underlined is a particular priority for Poland, he emphasized the need to implement the bold plan that was behind its creation. With this in mind he urged conclusion of the Deep and Comprehensive Free Trade Agreement between the EU and Ukraine. He underlined that this would mark a historical success for all of Europe, and would help open the way to similar processes in other countries. A longer summary of the speech (in Polish) can be found on the President’s official website.

Also speaking at the Ceremony the Rector of the College of Europe Jörg MONAR urged the students to devote themselves to creative, humane, questioning enquiry in their studies and their professional lives. He did so in the context of his speech where he recalled the life and works of the Patron of the 2013-2014 Promotion, Voltaire.

Earlier the Chairman of the College of Europe Foundation in Poland, Mr Jacek SARYUSZ-WOLSKI MEP had similarly asked students to emulate President KOMOROWSKI, who had himself through his work in the underground press and in Solidarity committed much of his life in pre-1989 Poland to freeing his country from the Communist regime.

Speaking on behalf of staff and students the Vice-Rector, Ms Ewa OŚNIECKA-TAMECKA thanked President KOMOROWSKI for his presence and support for the College of Europe mission and gave him a gift featuring a painting of the Natolin campus.