The Natolin Campus of the College of Europe invited students, professors, experts and all interested to a public debate on "Security for Europe in a Time of Crisis", which took place in the Royal Łazienki Palace in Warsaw on Friday 18 November 2016. 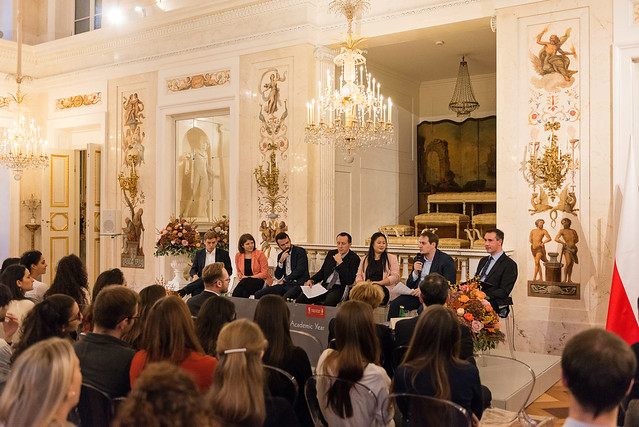 The debate, organized by the European Civilization Chair, addressed the problems of security facing Europe. The year 2016 has already seen an ongoing, cumulative crisis in the EU and its neighbourhoods. Among its principal manifestations have been the decision by more than half of those voting that the United Kingdom should leave the EU (Brexit); the unsolved problems connected with the arrival of refugees and migrants from the war-torn Middle East and North Africa; deadly attacks by terrorists, most often in the name of the so-called Islamic State; dramatic developments in Turkey; continued war in Ukraine, linked with power politics pursued by "hybrid" means on the EU's eastern flank by Russia; isolationist sentiment in the USA (whose presidential election was on 8 November); and continued economic stagnation and painfully high unemployment in many countries of the EU.

In response to these and other challenges, some have urged the rapid creation of substantial EU armed forces and security services under a single command structure, in order to give teeth to a common foreign policy. Others prefer to work through NATO. The purpose of a pluralist and rational debate on the problem of European security was to contribute to helping Europe – understood not in its narrower institutional sense, but as the entire community of its countries and citizens – to emerge strengthened from this time of crisis.