Visit of Mr Michael ROTH, German Minister of State for Europe, to the Natolin campus 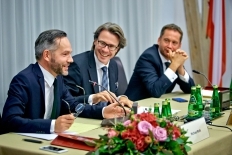 After Mr HÜTTEMANN had briefly outlined the European Movement’s long-standing cooperation with the College of Europe, Professor SCHUMACHER, in his introductory remarks, and in anticipation of Minister ROTH’s lecture, discussed the notion of crisis and how crises have been impacting on the process of European integration ever since it was launched in the 1950s.

Addressing the current refugee crisis, and in fact other crises the European Union is currently faced with, Minister ROTH gave a lecture entitled "Germany and Poland: Responsibility to Act European". While reminding the audience that Europe is in fact a continent of immigration, and acknowledging the deficiencies of Dublin-III, he argued in favour of a common strategy to tackle the current refugee crisis. 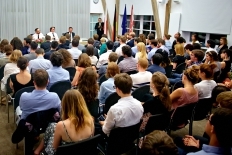 Minister ROTH explained Germany’s position regarding a potential quota system for the redistribution of refugees, but also pointed to its limitations, thus arguing that such a system can only work if a culture of welcoming refugees exists all across the EU. Also, for such a strategy to be successful, he emphasized that the practice of focusing on national interests needs to be overcome and that the crisis itself needs to be tackled at its roots, i.e. on the regional level.

The lecture was eventually followed by a Q&A session during which questions related to the current refugee crisis, political developments in the EU’s southern neighbourhood, the Eurozone crisis, demographic developments in Europe, and institutional developments within the EU were raised.

The full speech of Minister Michael ROTH is available here and his full curriculum vitae is available here. The event was also featured on the official website of the European Movement Germany, here (in German language).