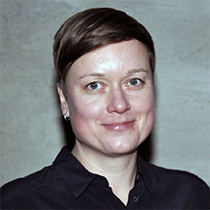 Anneli Kimber Lindwall is a communication professional with almost 20 years of experience in the public and international development sectors in the EU and in its Eastern Neighbourhood.

Her main task now is to develop EU campaigns for the Eastern Neighbourhood and manage 700 members strong Young European Ambassadors network. While working for the East Stratcom Task Force, her job was to improve the perceptions of the EU in its Eastern Neighbourhood and modernise the way the EU headquarters and delegations in these countries communicate. Additionally, she was responsible for the team's efforts to support independent media in the Eastern Partner countries and she was actively involved in running the EU vs Disinformation communication campaign online.

Previously, she has worked as the press secretary for the Estonian Ministry of Foreign Affairs, as a communication officer for the UK Foreign and Commonwealth Office and for the UK’s Department for International Development. She was the first press diplomat at the Estonian Embassy in London. Before taking up her recent strategic communication roles, she worked as a senior communication consultant for the EU and the UNDP in Armenia, Georgia, the Republic of Moldova and Ukraine.

Over the years, she has delivered numerous strategic communication workshops for journalists, diplomats, students and EU officials. While working as a consultant for the Estonian Centre of Eastern Partnership, she developed a comprehensive training programme for bringing together media and government communicators in the Eastern Partner countries. In 2015 she wrote a study reviewing and assessing how the EU communicates in its Eastern Neighbourhood.

She has a Master’s degree in international relations and development economics from the University of London, School of Oriental and African Studies.