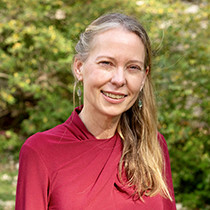 Prof. Kathleen Cavanaugh is socio-legal scholar and the Director of the Pozen Center for Human Rights and Faculty at the University of Chicago (SSD/Human Rights).  She holds a PhD in Comparative Politics from the London School of Economics & Political Science (1997) and a LL.M (Distinction) from the Queen’s University of Belfast, Northern Ireland (1998). She has held several Visiting Lectureships including: Visiting Research Fellow, Minerva Centre for Human Rights, Hebrew University, Israel (2001), and Visiting Lecturer, Department of International Relations, Boston University, Massachusetts, USA (1998) and was awarded a Fellowship at the Centre for Socio-Legal Studies, University of Oxford (2006-7).

Prof. Cavanaugh’s scholarship, like her academic training, is interdisciplinary.  In broad terms, her research seeks to interrogate questions of law in its social context.  She has published on international human rights and humanitarian law; protracted conflict on both a regional and comparative basis; theoretical as well as applied research on the use of political violence; ethno-nationalism (including questions of identity, culture and religion); Islam and rights-based discourse, minority rights in the Middle East; the use of international legal mechanisms in regulating protracted conflict; and, more recently, militant democracy and the politics of memory.  Her most recent book, Minority Rights in the Middle East (Oxford University Press) was the result of a three-year research project and is co-authored with Joshua Castellino.  Her current research project,  Militant Democracy and the Preventative State, examines how the permanence of emergency is beginning to give the concept of ‘securitization of rights’ legal legs.

Recent research grants include an award from the Arts and Humanities Research Council/DFID (UK) to carry out work on Understanding and Addressing the Impact of Invisibility on Conflict-Related Male Sex Violence in Syria (2020) and from the British Academy/Leverhulme Research Grant Fund, to carry out work on 'Faith' in Democracy? Militant Democracy, Legal Pluralism and the Turkish State (2015).